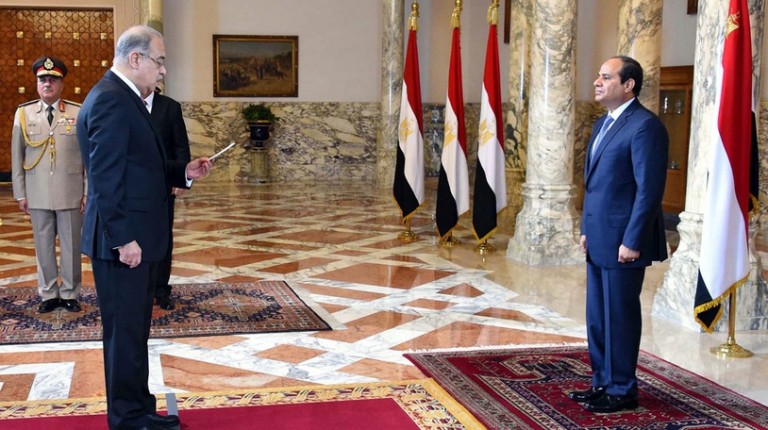 Rumours have circulated in different media outlets regarding a potential cabinet reshuffling, supported by members of parliament.

The parliamentary calls for areshuffle did not mention the main ministers they sought to replace or the ministries that should be subject to the reshuffle. However, the high inflation and the current economic conditions are cited as important reasons for the reshuffling call.

Ministries dealing with the economy and the business community may bechanged.

The main ministries responsible for implementing major changes and reforms in Egypt’s economy are El-Garhy, Kabil, Nasr, and Khorshid.

Daily News Egypt asked economic experts about the performance of those main ministries.

Omar El-Shenety, CEO of Multiples Group, said that government policies are based on implementing reforms and borrowing from international institutions for two main reasons. Those are to support the budget and other governmental payments, and secondly, to be a token and proof of approval for the Egyptian economy.

He believes that the loans Egypt has received in the past years are efforts, but not necessarily successes.

He added that the deal between Egypt, the World Bank, and the African Development Bank was clearer and more transparentthan the loan by the International Monetary Fund (IMF), which did not get approved by parliament until now. He stated that the deal between the government and the IMF board of directors is unknown, whichraises questions.

It is worth noting that Nasr announced that the World Bank and the African Development Bank accepted providing their second loan tranches to Egypt. Those would be transferred within the current month.

Regarding the ministry’s performance, El-Shenety said that when the government implements a lot of reforms in a short period, it would be hard to measure the performance within six months.

He stated that people are not satisfied with the reforms implemented in the past months. However, when the economic situation becomes more stable, the results would be tangible, and the performance would be measurable, he noted.

“The regional situation iscurrently not at its best,” El-Shenety said, adding that the government has to promote the image of Egypt’s investment climate in order to attract foreign direct investments.

He believes that foreign direct investments to Egypt would be increasing over the coming period; however, he cautioned that these investments would need time to show any results as investment projects need time to be set up and carried out.

“Investing in portfolios would be the most attractive investment opportunityat the current time,” he said.

Heexplained that approving the new investment law is the right thing to do for now, adding that if it had been issued before, it would not have changed a thing because no investors would invest in Egypt with a US dollar shortage and unstable exchange rates due to an informal market.

At the end of December, the cabinet approved the final draft of the new investment law, according to Khorshid.

The law was sent to the State Council for adjustments in legal drafting, before it is submitted to parliament for the final approval.

Khorshid said during a press conference held at the cabinet’s office that issuing the executive regulations of the law will occur as soon as possible in order for it to be activated. She noted that the cabinet agreed to the cancellation of private free zones and the expansion of technological investment areas.

“Decisions made by the Supreme Council for Investment are important, and they encourage attracting investments,” he noted.

The Ministry of Finance plans the monetary policy of the country, but economic expert Hani Tawfik labelled the current minister’s performance as “not impressive”.

Tawfik, who participated in governmental meetings with Prime Minister Sherif Ismail, said that the lack of political will to change tends to reduce the performance of any ministry,whether that be El-Garhy or any other minister.

Tawfik said that if the ministry would change its way and would actually gain its income from taxes, it would better the bad situation of economy.

He said that if El-Garhy increased the segment of tax payers to meet the rate of other countries’ income from taxes, it would change everything for the better.

Tawfik explained that on average, the ministry gains EGP400bn from taxes, and if the ministry would earn an amount similar to the global rate, which is around 25%, it would earn EGP 700-750bn.

“Such income could turn the budget deficit into surplus,” Tawfik noted.He believes that parliament can make the decision to raise the tax.

Tawfikadded that a large segment of the population, which has a 50%-share of the income earned in the country, does not pay taxes, such as doctors, private clinics, lawyers, and construction contractors.

By the end of last December, El-Garhy announced what the ministry had accomplished in 2016.

In the statement, El-Garhy said that he had worked on nine different pillars, of which implementing the value-added tax and the IMF loan were the main achieved goals.

However,he also said that the ministry had set three goals for the country’s budget in fiscal year (FY) 2017/2018. Thesegoals aim at raising the GDP by 5%, reducing unemployment to 11%, and cutting the national debt to 94% of Egypt’s GDP.

These goals were too optimistic when compared to current economic indicators, according to MedhatNafea, an economic expert.

He stated that the government’s performance is not even close to the promises El-Garhy made, adding that previous governmental decisions raised inflation, which has affected prices and reduced the citizens’ purchasing power.

Nafea explained that if people spent more on products, they would create demand, which positively affects the GDP.

Regarding the minister’s promise to reduce the unemployment rate, he said that attracting new investments is the only way to achieve such a target.

Nafea said that the government has to focus on small- and medium-sized enterprises (SMEs), explaining that SMEs are easier to operate and create a lot of jobs. “The ministry has to consider formalising the informal market,” he noted, adding that it would increase the country’s GDP.

The expert does not believe that the ministry is saying the truth about reducing Egypt’s debt, when the government is borrowing more and more loans. It is worth noting that Egypt’s domestic public debt jumped from EGP 2.116tn at the end of June 2015 to EGP 2.612tn by the end of June 2016, according to the Central Bank of Egypt.

Kabil came from the private sector with knowledge of all the problems the sector faces. However, his performance is not what investorscurrently need, according to AbobakrEmam, head of the research department at Prime Holding.

He explained that Egypt’s exports did not witness a surprising improvement, adding that the government must push investors to increase their exports by solving any problems they face.

“The only way to rescue the Egyptian economy is to increase its exports,” he said.

In conclusion, neither the experts nor parliament members called for one of the mentioned ministers to leave cabinet. However, they were not totally satisfied withthe ministers’ performance.

Cabinet reshuffle will not include the economic group: parliamentary sources