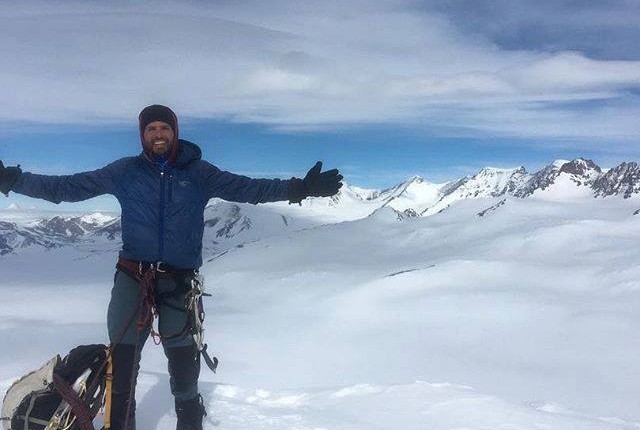 No one imagined that years after that little kid knew he suffered from chronic asthma, he would engrave his name into history as the first person to climb three mountains in Antarctica, called a “first ascent”. Passionate Egyptian adventurer Omar Samra recently broke another world record and achieved his life-long dream of having his feet be the very first to step on the mountains in a trip that took 10 days.

Aiming to let people know about the details of his trip, including the struggles, difficulties, and happy moments, Samra will launch an art exhibition in which he will talk about the trip, joined by artist Tarek Abdelkawi and gallery curator Alya Sabry.

“Making a ‘first ascent’ has always been a dream of mine. However, exploration is not just about going someplace first; it’s about trying to become the best version of ourselves every day of your life,” Samra said. “And to do so, we need to constantly work hard to explore where our boundaries lie and then push them even further. It is in these precious moments that we can truly discover what we were born to do,” he added.

Starting on 17 February in Caravanserai Art Gallery in Zamalek, the exhibition will include illustrations, photos, and videos. Through a set of audio records of Samra while climbing and some of his equipment and mountaineering gear, people will get to see part of Samra’s life through his life adventure. Moreover, they will be introduced to the tools that kept him safe and warm in the world’s highest, coldest, and driest continent on earth.

Samra named the three mountains after the names of his family. One was named “Samra”, the other after his late wife “Marwa”, and the third after his daughter “Teela”.

“Three beautiful peaks standing tall and untouched side by side for millions of years until we finally set foot on them and reached their summit. To me, they represent the eternal grace and purity, and for this reason I decided to name them Mount Samra, Mount Marwa, and Mount Teela, after my family name and the two greatest loves of my life. May we always be together,” Samra stated on his official Facebook page.

Samra named his route in climbing the three mountains “Akira” after his “stubborn” Siberian Husky dog.

The “first ascent” concluded seven mountain-climbs in total, of which six were climbed through new routes and one of them named “The Egyptian Direct”. It’s also Samra’s third trip to this remote and isolated part of the planet in the South Pole. His first visit was in January 2012, in which he successfully reached the summit of Vinson Massif. His second trip was in December 2014, where he succeeded in becoming the first Egyptian to ski to the South Pole as part of achieving the Explorer’s Grand Slam title, a challenge that has only been achieved by less than 40 people in history.

Omar Samra only Egyptian and Arab to qualify for space travel

From Everest to Alaska, Omar Samra continues to aspire and inspire