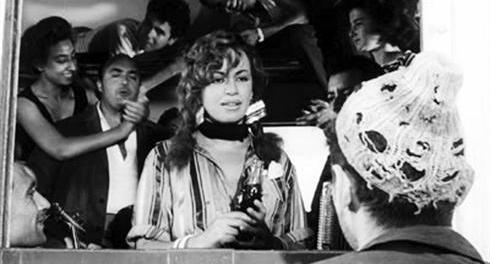 In the second part of Youssef Chahine’s autobiographical series Hadoota Masreya (An Egyptian Story,1982), his character (played by Nour El-Sherif) tells his producer and father-in-law (played by Tawfiq Al-Dikn) that his new film Bab Al-Hadid will include many “sex” scenes and will garner EGP 1m.

Bab Al-Hadid (The Iron Door) is Chahine’s 11th film, acting as a brilliantly awkward and well-made piece of art in the director’s career. The film showed a clear and radical growth in Chahine’s skills as a filmmaker, while combining Egyptian social realism (a wave Chahine spearheaded), the French Nouvelle Vague, and Russian (rather the Eisensteinian) editing techniques. Keeping all these styles in mind, Chahine couldn’t ignore his passion for American cinema and gave it a Hollywood-tailored plot.

Compared to previous films, such as the 1954 Struggle in the Valley and Struggle in the Pier, both of which portrayed straightforward classist confrontations whether between a feudal lord and farmers or between a pasha and a quasi-sailors leader, Bab Al-Hadid’s noir plot takes a wider and more critical look on the very sophisticated and disrupting Cairo train station.

The neorealist approach in Bab Al-Hadid diversified its characters from oppressed porters who are struggling for unionism and a physically challenged and frustrated newspaper vendor, to female vendors trying to escape the monopoly of the buffet manager, strangely enough a lover waiting for her boyfriend, and a lost, naive upper Egyptian traveller stuck in the lanes of the station.

Each character deserves a study on its own, highlighting its history and significance to the plot. Each of them uniquely and unilaterally participated in creating the crescendo of the film’s conclusion. Two of the most interesting are Abu Sri (played Farid Shawqi) and Qinawi (played by Chahine himself).

Abu Sri’s unionist and Leninist inclination not only marks Chahine’s political inclinations, but shows his belief in a one-man-solution to a dispersed and unorganised group of labourers. He believes that the government-controlled Labour Office will create a union to handle the workers’ misfortunes. However, their consciousness needs a spearhead to teach and raise awareness against the reactionary old guard. The masculine macho character is filmed from bottom-up as he is spreading wisdom to the workers, in compositions captured by Alevise Orfanelli.

Qinawi’s character manages, despite its repulsiveness, to draw some sympathy from the viewer. His love is unrequited but pure, violent but tender. His eyes, presented through close-ups, show his eagerness to have Hanouma. Angered by her rejection, he turns wild, unfolding the thriller sequence in the film.

Between the rusty rooms, sweaty characters, and noisy background, Chahine delivered the chaos and panic in the one and only Cairo train station, which the narrator describes at the beginning of the film as “the heart of the capital. Every minute a train leaves and another one arrives. Thousands meet to say goodbye, people from the North and the South, natives and foreigners, employed and unemployed.”

In Egypt in 1958, the new republic witnessed a King being toppled, a general being ousted by a colonel, and a new social system being enforced. Chahine’s decision to focus on the very low of the lumpen proletariat, as well as its noir atmosphere was unheard of on the silver screen, resulting in poor reviews from the public, and positive ones from critics.

The film didn’t include “sex scenes” and didn’t earn EGP 1m, but the masterpiece proved that    Chahine, as he said in Hadoota Masreya, that he “always did what he saw as decent.” This perfectly applies to Bab Al-Hadid.