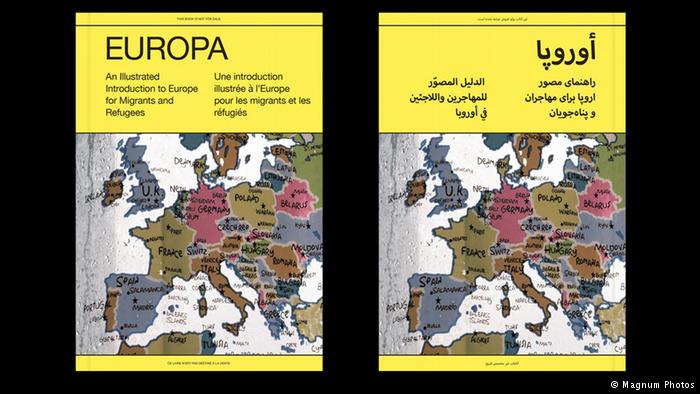 Roughly 1 million people applied for asylum in the European Union last year. A special guide published in several languages now gives them practical tips and useful background information on the history of Europe.Poles, Czechs, Slovaks, Belarussians, Lithuanians, Ukrainians, Hungarians, Germans – they were once all refugees themselves.

Roughly 20 million people were displaced by World War II. During the winter of 1944/45, 12 million Germans were expelled from their former homes in East Prussia, Pomerania, Brandenburg, Silesia and Poland. During the war in the former Yugoslavia in the 1990s, millions of people fled their homes.

According to the UNHCR, 65 million people worldwide were refugees in 2016, fleeing war, terrorism and hunger – especially in war-torn Syria. Roughly 1 million people applied for asylum in the EU last year, most of them from Syria, Afghanistan and Iraq.

How can we help?

For the last 20 years, German Magnum photographer Thomas Dworzak has been working in regions ripped apart by war and crisis. He took pictures in Yugoslavia in the early 1990s, as well as in Chechnya, Georgia, Iraq and Afghanistan.

He was on the Balkan route in the fall of 2015 when hundreds of thousands of refugees were trying to reach northern and western Europe. Dworzak was frustrated by what he saw, observing how he and other photographers around him were all doing the same thing: capturing the refugees’ suffering in the same pictures and the stories repeated over and over. Nothing seemed to change.

“I got the impression that my pictures wouldn’t make a big difference,” he said. That’s why he decided to try out something else. “I noticed that the refugees were asking a lot of questions. How do I apply for asylum in Belgium? What kind of health system do they have over there? They were mainly interested in practical things.”

Knowing how the refugees could access information via Facebook and various apps, Dworzak decided to go one step further and develop an introduction into life in Europe.

He came up with a book full of practical information and useful tips, but also some chapters on the history of Europe and the EU, as well as political debates in Europe that would affect their future as migrants. In addition, the book contains contributions by journalists and authors, and personal reports by Europeans.

Thanks to the work of many contributors, the book “Europa: An Illustrated Introduction to Europe for Migrants and Refugees” was published this past November, less than a year after the project was started. It was supported by the publisher Al-liquindoi, the Arab Fund for Arts and Culture (AFAC), the Italian cultural organization On the Move, the UNHCR and the Allianz Cultural Foundation.

Another major contributor was, naturally, Magnum Photos.The photo agency, known around the world for its huge archive of historical and present-day photos, contributed many iconic images.

Without its involvement, the book – published in English, French, Farsi and Arabic – certainly wouldn’t be what it is now. The mostly black-and-white photos focus on postwar Germany, the Western way of life, the destruction of the former Yugoslavia in the 1990s and a lot more.

“Just looking at the pictures, you wouldn’t know where they were shot. That was an important aspect to me,” said Alia Malek, a New York-based journalist who edited the book and helped develop its structure.

The idea was to show the refugees that Europe hasn’t always been what it is now, a rich and industrialized continent, and to emphasize that Europe also saw wars and military conflicts until most of its states peacefully united in the European Union.

“Telling the refugees the story of Europe could strengthen their hope for reconciliation,” added Malek.

The book also contains plenty of practical tips. Dworzak’s special project was to take pictures of street signs, supermarket labels, ticket machines and trash cans – all normal, everyday things which could look completely different in the refugees’ home countries. With his pictures, Dworzak hopes to help these new arrivals get around and navigate daily life in Europe.

The book also tells readers about the typical foods and drinks, traditions and popular films and books in Germany, Austria, Belgium, Spain, France, Greece, Italy, the Netherlands, Britain and Sweden, countries that have become particularly popular with refugees and migrants. In addition, the book lists major information centers.

“I got the impression that these people were very happy about the fact that something had been created especially for them,” explained Jessica Murray of publisher Al-liquindoi, who coordinated the project. She toured Europe at the end of November in order to distribute 5,000 copies free of charge to NGOs, refugee shelters and aid workers.

Murray’s trip was very successful – “refugees were fascinated by the amount of information in the book,” she remembered. “Also, teachers working with the refugees were impressed by the many ways in which they can make use of the book.”

Another objective of the book’s authors and editors is to promote cultural exchange between different groups of refugees. Particularly helpful in this regard are the personal accounts of people living and working in Europe, locals and newcomers, refugees of the post-war era and of today.

“Europeans and refugees are given an opportunity to see their own experiences reflected in those of others,” said Malek. Though to what extent the book is able to achieve its high-minded goal remains to be seen.

“Europa: An Illustrated Introduction to Europe for Migrants and Refugees” is a charitable, non-profit project. The book is not available in bookstores. The first edition of 5,000 copies was distributed for free to NGOs and refugee organizations. Aid workers working with refugees and migrants can order a copy by contacting Jessica Murray (jessica@al-liquindoi.com)

“Refugees in Germany”.. I will not return to my country to live in wrench: Abdel Hamid