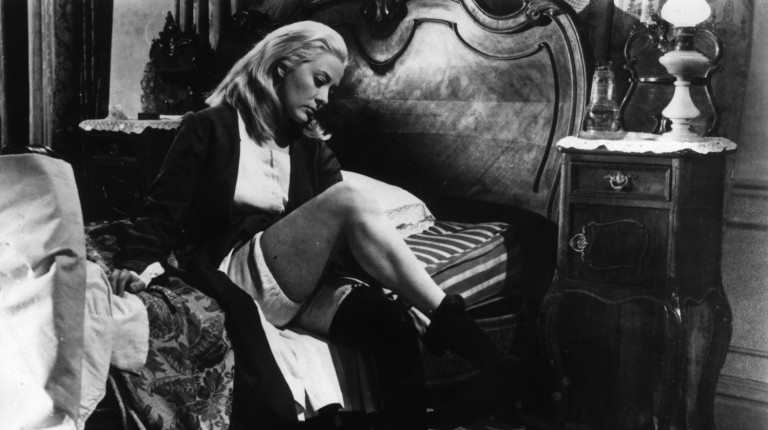 The hidden corridors of the human soul have secrets that are unheard of. And when death approaches, the truth is exposed in front of us, leading us to bounce back in amazement.  And how couldn’t we know this before?

Only cinema exposes humans, and in the niche of cameras, removes the masks. Spanish director Luis Buñuel did just this in his 1961 masterpiece Viridiana, exposing everything and reassessing it.

This film is considered to be the peak of this veteran director’s work during his revolutionary cinematic years. In this film, his revolutionary ideas and resentment towards the tripartite of authority, religion, and capital are laid bare.

Buñuel rebels against the church and the bourgeoisie, returning the impoverished class to its origins, and revealing the falsity of the human soul. He also sympathised with Jesus Christ, who was crucified by hateful people.

Viridiana of the White Cross

Buñuel starts his masterpiece with scenes in the courtyards of a Catholic convent, where his female protagonist Viridiana (played by Silvia Pinal), is preparing to start her life as a nun. However, she is invited to visit the husband of her dead aunt, to express gratitude to him for financially supporting her before she commits to the monastery. Here, Buñuel exposes one of the very secrets of the human psyche, which is greed. The older relative, who Viridiana looks up to as a father, craves her sexually, and asks her to stay to become his wife instead.

Jesus who was crucified for us

From the contradictions of the human soul in which good and evil have been fighting since the beginning of time is guilt. The elder relative feels guilt towards Viridiana, who decides to return to the convent after he tells her he had raped her the night before after she was drugged. When she refused to stay with him, he confesses that he did not rape her, but wished she would stay. As she is leaving, she is stopped by a police officer at the bus stop who informs her that her uncle has taken his own life. Veridiana inherits his estate, and chooses to return to the estate racked with guilt. The same guilt which prevents her from returning to the monastery.

Viridiana couldn’t sit tight practicing charity, something she was born for, without being crucified on the cross of God a thousand times. Pure as she is, she rushed to host the poor and needy in the house which her dead relative left her. She reaches out to the blind, the lepers, and the prostitutes. Believing that all those with a disability are in need, she pursed with her religious naivety to equate between all those poor individuals who are oppressed by disease and poverty. She tries to find jobs for each according to their ability, in a clear reference to the naivety of religious rule, and its strategy towards poverty: to adapt with the poverty of the poor, not eliminate the causes of poverty.

Jesus was crucified only because he was polite to the rude

This happened to Viridiana, after hosting those in need and helping them. However, the illegitimate son of her dead relative comes back, confessing his hate towards his father. He not only clashes with Viridiana, this strange neighbour who is feeding the impoverished, but is also attracted to her, like his father. The son, Georgy, is a symbol to the capitalist class, which despises the poor. The director also argues that the poor can hate among themselves, and hate those that give them help and shelter. One of the characters, an impoverished man who was kicked out of his community as they feared he would spread disease, was welcomed by Viridiana but ends up hating her. In one scene, where dinner is served for the poor, symbolising the last supper, two of the beggars rape Virdiana, with the help of the diseased impoverished man. He helped in the crucifying of Jesus, or Viridiana, after she helped him.

Viridiana is not just a film, and Buñueli is not just a director of this humanistic ballad who is disaffected with everything. Viridiana is a story about tormented humanity, about Christ who was crucified due to excessive politeness, and about other repulsive humans. Here, Buñuel used the camera to be a prophet to this suffering of humanity with all its scars.