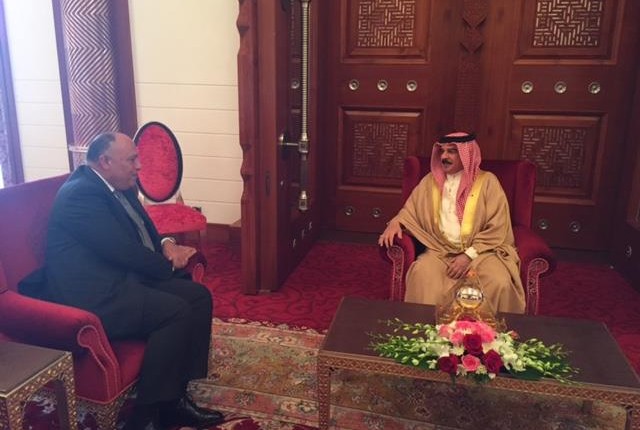 Egypt’s Foreign Minister Sameh Shoukry said on Wednesday that he was assigned to visit Bahrain by President Abdel Fattah Al-Sisi to deliver a message to the king of Bahrain, stressing the importance of enhancing bilateral relations in all fields. Shoukry met with the Bahraini foreign minister and the prime minister.

Shoukry told his Bahraini counterpart Khalid Bin Ahmed Al-Khalifa that this is a message of solidarity with the Bahraini people. Shoukry discussed during the meeting the bilateral relations between Egypt and Bahrain and also tackled the turmoil in different countries in the Middle East.

In a statement issued by Egypt’s Foreign Ministry, the official spokesperson Ahmed Abou Zaid said that Bin Ahmed welcomed Shoukry in the Bahraini capital of Manama. Bin Ahmed also expressed his deep appreciation to Egypt for its continuous support to Bahrain.

The talks between Shoukry and Al-Khalifa centred on discussions pertaining to all fields of bilateral cooperation between the two countries, including enhancing relations in the fields of economy, trade, and tourism. Both foreign ministers also discussed the political turmoil in Syria, where Al-Khalifa was informed of Egypt’s position on the current Syrian crisis and what solutions are possible to settle the turmoil. Shoukry said that all factions in Syria should collaborate to reach an inclusive political solution.

Shoukry also met with Bahraini prime minister Khalifa Ben Salman Al-Khalifa along with other Bahraini officials. They also discussed bilateral relations between Egypt and Bahrain and the political turmoil in the Middle East.

On 5 January, Al-Sisi had a phone call with his Bahraini counterpart, during which they stressed the importance of fostering relations on various levels.