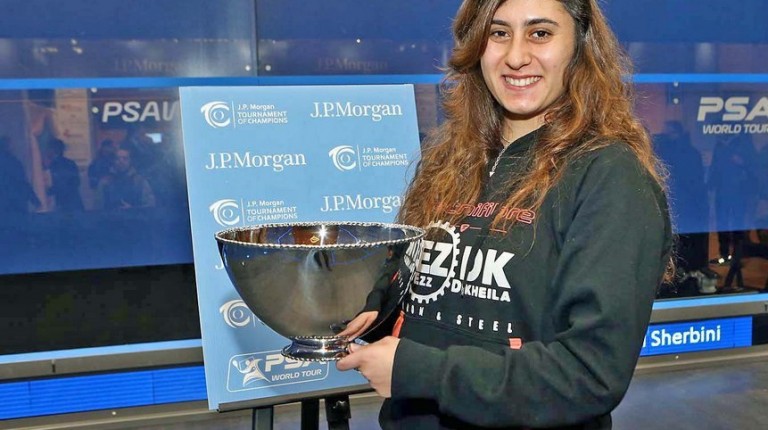 The 2017 J.P. Morgan Tournament of Champions celebrated its quarterfinals on 16 and 17 January with the presence of eight Egyptian players. Three of the competing players have qualified for the semifinals.

Among the men participating were Mohamed El-Shorbagy, ranked first internationally, and Karim Abdel Gawad, ranked second. Both players won their matches and have qualified to the semifinals.

The quarterfinals match between Abdel Gawad and Germany’s Simon Rösner started with an unfortunate game for the Egyptian champion, in which he lost by 11-2. The 2016 world champion turned the table on his German rival by winning the following three games, by 11-9, 11-5, and 11-8, respectively. The match ended 3-1 in Abdel Gawad’s favour.

Egypt’s Tarek Momen exited the tournament after losing to French Gregory Gaultier by 3-1. Gaultier won the first game by 11-3. Momen did not lose hope and won the second game 8-11. However, Gaultier did not give Momen a chance to reach the semifinals, as the French champion won the following two games by 11-5 and 11-7, respectively.

Moving to the women’s competition, the quarterfinals were a big upset as three Egyptian champions exited the tournament: Nouran Gohar, Omneya Abdel Kawy, and Raneem El-Welily.

Camille Serme won the first game against Gohar by 11-5. Gohar sought revenge by winning the second game by 9-11. The third game was on fire and went to 14 points; however, it was Serme’s game as she won by 14-12. After winning the fifth game by 11-9, Serme ended the match in her favour and the result was 3-1.

It seems to be a bright round for English players as Sarah-Jane Perry defeated El-Welily in a very strong match. Perry won the first two games by 11-7 and 12-10, respectively. El-Welily was adamant in securing her place at the semifinals, by winning the following two games by 10-12 and 5-11respectively. Perry was the one who managed to reach the semifinals after winning the fifth and decisive game by 11-5, turning the match’s final result to 3-2 in her favour.

Perry considered winning the match a big victory, saying: “That is my first win over Raneem, to reach my first ever World Series semifinal, and I get to play here inside Grand Central Terminal, so I am very pleased and very proud.”

The only Egyptian female champion who made it to the semifinals was Nour El-Sherbini, thanks to her victory against Malaysia’s Nicol David. Spectators witnessed an exciting quarterfinal match between the Egyptian champion, who is the most recent world champion, and the Malaysian champion, who has won the world championship eight times. El-Sherbini managed to snatch a victory by a score of 3-2 (115/6-11/11-6/13-15/11-8).

In this regard, El-Sherbini said she was “really happy to sneak the win; it was really important for me to win that match,” adding that “beating a player of her calibre at any point is special.”

Semifinals are taking place on 18 January. Abdel Gawad will play against England’s James Willstrop. El-Shorbagy will face off against Gaultier. El-Sherbini will meet Serme, and Perry will confront Massaro.