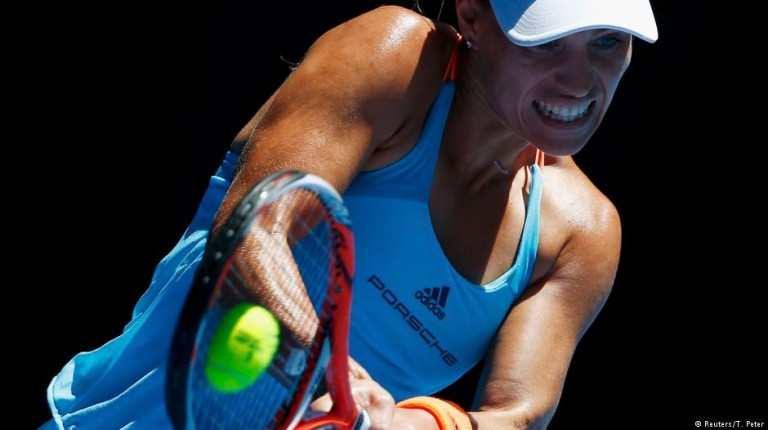 Defending champion Angelique Kerber has celebrated her 29th birthday by advancing to the third round of the Australian Open. In the men’s draw, four-time champion Roger Federer also advanced.Angelique Kerber was given a battle by her fellow German, Carina Witthöft, in Melbourne on Wednesday, but eventually prevailed 6-2, 6-7 (3), 6-2 to advance to the third round of the first Grand Slam of the season.

Kerber started out solid in the first set, but struggled against some of Witthöft’s deep, powerful forehands late in the second. In the tiebreaker, she double-faulted twice – once on either side of the change of ends to surrender a 3-2 lead – as Witthöft won five straight points to level the match.

Kerber dropped her serve to open the third set, but recovered her composure and took a 4-1 lead, saving two break points in the fifth game. The defending champion went on to win the match in 2 hours and 8 minutes.

The match ended on a lighter note, as Kerber was treated to a rendition of “Happy Birthday” by the crowd at the Rod Laver Arena.

“I’m always playing on my birthday – always in Australia,” Kerber told reporters in the on-court interview. “I feel at home here. I’m 29. I’m getting older, but I think I’ll have a great day today.”

On the men’s side, Roger Federer advanced to the third round by beating Noah Rubin 7-5, 6-3, 7-6 (3) to keep intact his record of never having failed to reach the third round at the 18 Australian Opens he’s played in.

The 35-year-old former No.1 will face former Wimbledon finalist Tomas Berdych in the third round after the Czech posted a 6-3, 7-6 (6), 6-2 win over Ryan Harrison.

Angelique Kerber battles her way through first round of Australian Open

Murray hoping for a ‘different result’ against Djokovic