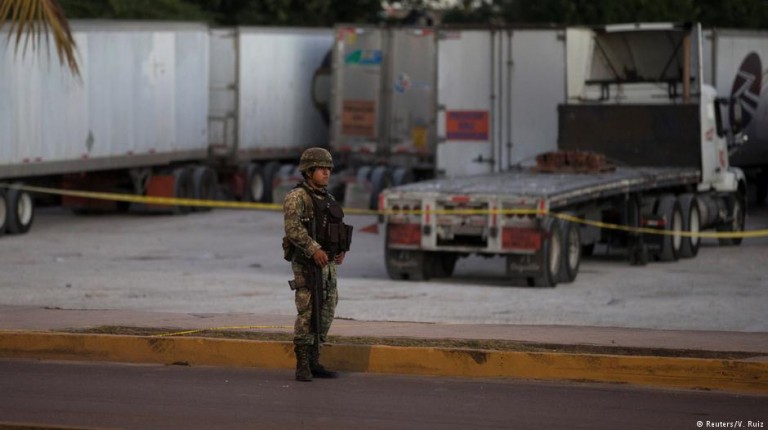 A new shooting in Mexico’s Caribbean region has left several people dead. The incident comes just a day after a gunman attacked people at a music festival in the area.Gunmen on Tuesday attacked a state prosecutor’s office in Cancun, killing at least three people, just one day after a shooting at a nearby nightclub left five dead.

Officials have not indicated the two incidents were linked, but the back-to-back shootings have shaken the region, a popular tourist destination for North Americans and Europeans.

Reports differed as to who and how many people were killed in Tuesday’s attack. Carlos Joaquin, governor of the state of Quintana Roo, where Cancun is located, said one policeman had been killed along with three of the attackers. Other sources reported that three people – one gunman and two employees of the prosecutor’s office – had been killed.

Joaquin said that five suspected attackers had been taken into custody. “The state is under control and in order. I want to reiterate that the fight against corruption and impunity is being taken seriously,” he said in a message to the media.

One witness saw the group of gunmen throw two explosive devices at the wall of the office. Hours later, hundreds of people fled the inside of a mall after suspected gunshots were heard, causing soldiers to rush in.

Mayor Remberto Estrada condemned the incident. “The attack on the state prosecutor’s office is unacceptable. We ask the population to remain calm,” he wrote on Twitter.

On Monday, nearby Playa del Carmen was rocked by a shooting outside the Blue Parrot nightclub during a BPM electronic music festival. Five people, including two Canadians, an Italian and a Colombian, were killed.

Local authorities said the attacker was likely a “lone shooter,” although no suspect or possible motive had been identified. Police were not treating the incident as a terrorist attack.