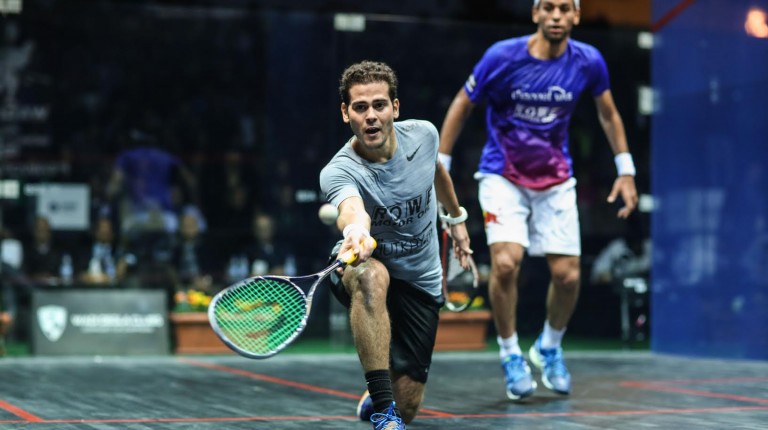 Karim Abdel Gawad was the only Egyptian who qualified for the men’s final match at the 2017 J.P. Morgan Tournament of Champions, after he defeated England’s James Willstrop in the semifinals by 3-0 (11-6/11-8/11-6).

The championship held its semifinals on 18 January, in which three Egyptians participated: Mohamed El-Shorbagy, Karim Abdel Gawad, and Nour El-Sherbini, who was the only female representing Egypt.

El-Shorbagy, who is ranked the first internationally and was the champion of the 2016 J.P. Morgan Tournament, exited the tournament after he lost to France’s Gregory Gaultier, ranked the third, in the semifinals.

The French champion won the first two games by 12-10 and 11-9, respectively. To secure his place at the final, El-Shorbagy got his revenge by winning the following two games by 11-9 and 11-4, respectively. Gaultier ended El-Shorbagy’s ambition in the championship as the French champion won the fifth and decisive game by 11-7. The match ended with 3-2 in Gaultier’s favour and was somehow dramatic as Gaultier seemed to be suffering from a leg injury in the middle of the match, but managed to clinch the final game.

Gaultier stated: “There is a lot of talk about Egyptian players dominating at the moment but there are players from other countries here as well, and we are showing that we are still competing and that our names deserve to be on trophies as well.”

Moving to the women’s competition, another French victory was made thanks to France’s Camille Serme, who at the semifinals won against El-Sherbini, who is ranked the first internationally, is the most recent world champion, and the champion of the 2016 J.P. Morgan Tournament of Champions.

In their battle, Serme won the first game. El-Sherbini tried her best and won the second game by 11-7. However, the French champion snatched the victory and won the following two games by 11-6 each.

Serme said in this regard: “Nour is so talented. If you give her the chance to attack, you are dead. I had to up the pace to take the time away from her and prevent her from playing her shots. I was just trying to play fast and strong.” She added: “I have to keep working if I want to match up and play like the Egyptian girls.”

Final matches are taking place on 19 January in which Abdel Gawad will play against Gaultier, and Serme against England’s Laura Massaro.