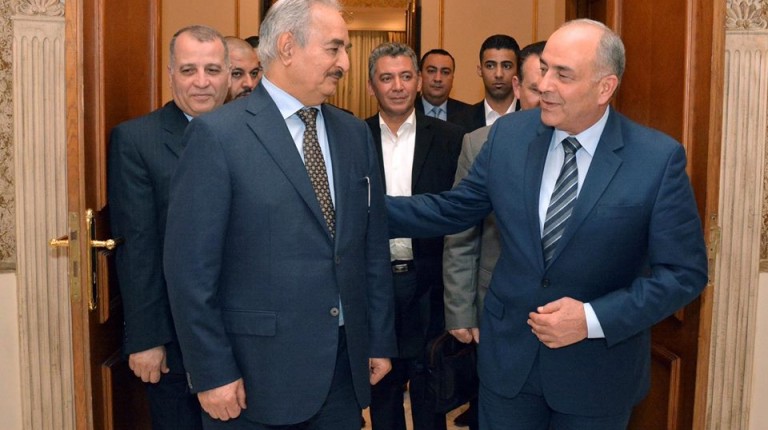 Egypt’s Foreign Minister Sameh Shoukry said on Saturday that the neighbouring countries to Libya are most affected by the turmoil and terrorism within its territories, including illegal immigration and weapons smuggling.

During his speech in the “Libyan Talks” meeting that is held in Cairo, Shoukry added that the Libyan factions should reach a political solution if they want to diminish terrorism.

Meanwhile, the leader of the Libyan National Army Khalifa Haftar said on Friday that he is ready to participate in any talks organised and sponsored by Cairo that aim to seek solutions to the political turmoil in Libya.

Haftar arrived in Cairo on Thursday in an unannounced visit. He met with Egypt’s army chief of staff Mahmoud Hegazy in order to follow up on the Libyan situation and assessing the progress following several meetings of Libyan factions in Cairo over the past few months.

Haftar also stressed the importance of supporting the Libyan army in its war on terrorism, in order to maintain the sovereignty of Libyan institutions. He also praised all the initiatives that aim to seek solutions to the Libyan turmoil.

Egypt has hosted several meetings of Libyan members of parliament and political figures over the past few months in an attempt to reach a political solution. The turmoil in Libya had started after the downfall of former Libyan president Muammar Ghaddafi. The country is divided into several political factions and militants have taken over several parts in Libya.