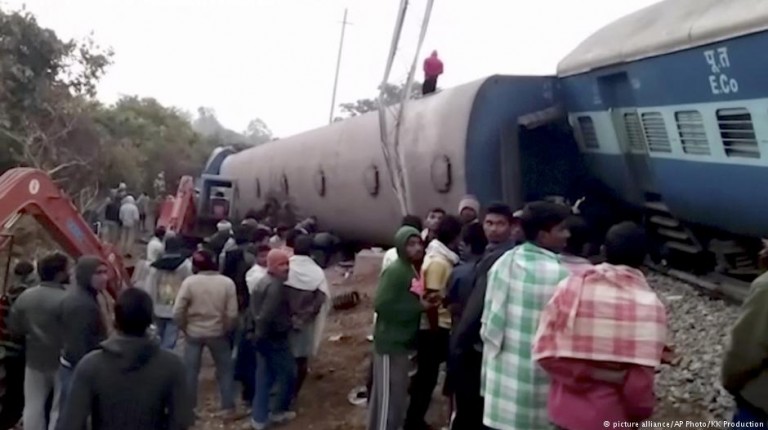 More than 30 people have been killed after a passenger train derailed in the southern Indian state of Andhra Pradesh. The accident is the latest in a series of disasters on the country’s rail network.At least 32 people were killed and another 50 injured after an overnight passenger train derailed around midnight on Saturday (1730 UTC) in the remote district of Vizianagram in southern India.

Rescuers were continuing to battle to pull survivors from the wreckage on Sunday, with a spokesman for East Coast Railways, J.P. Mishra, saying that the toll could rise. Mishra could give no immediate cause for the derailment.

He said the injured had been taken to two nearby hospitals.

The disaster occurred when eight coaches and the engine of the Jagdalpur-Bhubaneswar express left the rails near the Kunderu railway station.

The accident comes only two months after a similar accident killed nearly 150 people near the town of Kanpur in Uttar Pradesh, the deadliest rail disaster in the country in at least five years.

India’s railway network, which provides the main form of long-distance travel in the vast country, is the third largest in the world, but is poorly maintained and lacks modern signaling and communication systems. Some 23 million passengers use the network every day.

A government report in 2012 said that some 15,000 people were killed each year in train accidents. The worst occurred in 1981 when nearly 800 people died after a train fell into the Baghmati River in northern India.

Prime Minister Narendra Modi on Sunday tweeted his condolences for those killed in Saturday’s accident.

Last year, he pledged to invest $137 billion (128 billion euros) over the next five years to modernize the system.

Egypt in a monopoly of information