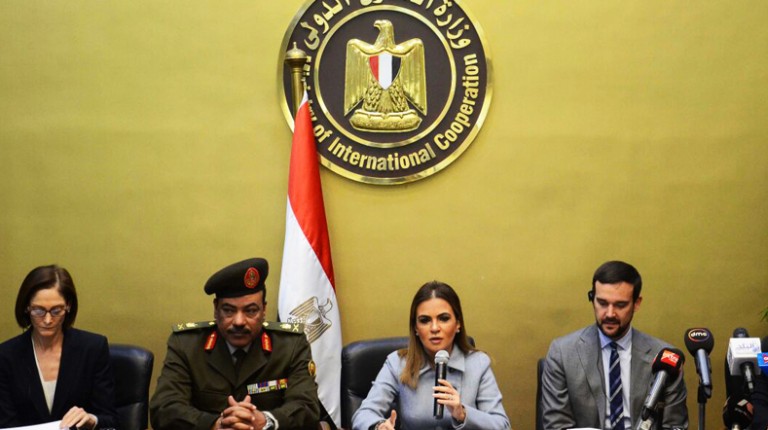 Minister of International Cooperation Sahar Nasr, alongside a representative of the Ministry of Defence, announced the establishment of the National Centre for Landmine Action and Sustainable Development.

During a meeting held with the European Union (EU) and the United Nations development programme (UNDP) representatives on Monday, the minister said that the centre will begin clearing 150,000 acres in the northern coast.

She emphasised that the centre will also establish infrastructure after clearing the area of landmines.

The centre will also consult with all regional and international bodies related to the removal of landmines in order to guarantee it can achieve its goals. The Ministry of Defence will be responsible for locating mines and clearing them, Nasr added.

She added that the government with its development partners have previously cleared 120,000 acres.  Promoting landmine awareness for children, providing better living conditions for people injured by landmines, establishing a prosthetics centre, and supporting the people in starting small businesses are core to the centre and government’s plans, Nasr said.

Randa Abu Al-Hassan, deputy resident representative of the UNDP, stated that the UNDP has been a partner of Egypt since 2007, allocating approximately $1.2m for clearing previous areas in the northern coast.

She emphasised that the UNDP is looking for further cooperation with the Egyptian government.

On a different issue, Nasr announced that she will allocate 50% of all grants proposed to small- and medium-sized enterprises (SMEs) for women.

She said in a meeting that youth represent 40% of Egypt’s population, adding that supporting them will accelerate development, because SMEs provide 60% of all jobs in Egypt, and represent 90% of all businesses.

The minister stated that youth can access grants through the Social Fund for Development (SFD), banks, and private associations that finance SMEs.

She added that the government will work on establishing the infrastructure and roads that will help small investors start their own businesses.