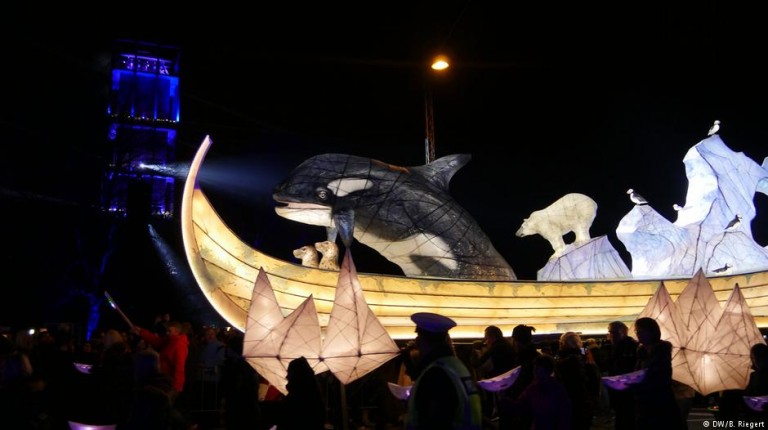 If you’re looking for warm-blooded Danes, look no further: Residents and visitors have flocked to Aarhus to launch the city as one of this year’s European Capitals of Culture. DW’s Bernd Riegert reports.Almost 1,000 singers accompanied by two orchestras took to Aarhus’ stages as the Danish city celebrated the colorful launch of its European Capital of Culture celebrations. For one year, the coastal city will highlight both Danish and international culture, featuring hundreds of events, including ballet, theater, opera and concerts.

The three big museums in town – the Aarhus Art Museum (ARoS), the Old Town Museum and the Moesgard Museum of Prehistory – are the major players on Aarhus extensive event calendar for 2017.

Eivör Palsdottir, a singer and composer who hails from the Faroe Islands, said she was impressed by the “wonderful, heartwarming” display. The Danish folk performer was among those who contributed her musical works to the opening gala in the city’s harbor.

A town united in its love for culture

Surrounded by water and the bright display of fireworks, her Nordic hymns completed a rather fitting start to the year-long events. Roaring applause from more than 30,000 participants appeared to underline that impression. More than half of Denmark’s second-largest city came out to join in on the all the merriment, said a policeman. Organizers had expected fewer people to show up.

The mayor of Aarhus, Jacob Bundsgard, ceremoniously sent a regatta of 4,000 Viking boats of varying proportions off to a parade from the Aarhus concert hall to the city’s harbor.

Queen Margrethe II of Denmark was also in attendance, watching the vessels, which had lovingly been built by various citizens of Aarhus and its 18 neighboring communities, as they added a local dimension to the festivities. Aarhus, after all, started off as a Viking city. She arrived a bit late – but she’s allowed to do that in Denmark.

Mayor Bundsgard told DW that all the town’s residents were behind the project, which he said took many years to set up and pull off: “We have thousands of volunteers. This has truly become the talk of the town.”

Aarhus: a transient city for centuries

He added that the parade of ships included some political elements in addition to highlighting the town’s Viking heritage: Different boats underscored various social issues, including climate change, migration and sustainability. Bundsgard also stressed that Aarhus is a town of “minorities and immigrants.”

“We’re proud of this, and will also be celebrating this aspect of our city in this year.”

In addition to Danish music, performers at the opening night also played Beethoven’s “Ode to Joy” – the hymn of the European Union. Despite growing populism in Denmark and elsewhere in Europe, the event hopes to highlight not only Danish culture but Denmark’s place in Europe.

The director-general of the event, Rebecca Matthews, says that the framework of the European Capital status provides an opportunity for the city to rediscover and reinvent culture. “Let’s rethink” is the slogan she goes by.

The city appears to be infused by this youthful spirit – in no small parts due to the high number of children and young people attending the opening night. Matthews says that Aarhus is a “young city,” which is shown in the fact that 16 schools as well as the local university took part in building the regatta of boats for the launch event.

“In fact, we actually hope to address a young audience. We want to try new things, participate in activities and rethink everything to find solutions for the problems that we are currently surrounded by,” Matthews said.

Looking into the future

Aarhus mayor Jacob Bundsgard is already looking at what’s coming down the line at the end of the Aarhus 2017 events. He told DW that what’s more important than the status as European Capital of Culture in 2017 is the legacy the event leaves behind:

“What’s most important is actually not the year but what comes after the year. The legacy of 2017 here in Aarhus is what we are focusing on; so we want all the cultural institutions to increase the competencies, to jump a level in terms of internationalization and quality, and we want all the citizens to be even more open-minded and curious about what’s going on in the world.”

Bundsgard is confident that the events of this special year will finally put Aarhus on the map as an international city of culture. The Danish city will also be joined by the Cypriot town of Paphos, which next week will launch its own set of events to celebrate being this year’s other European Capital of Culture.