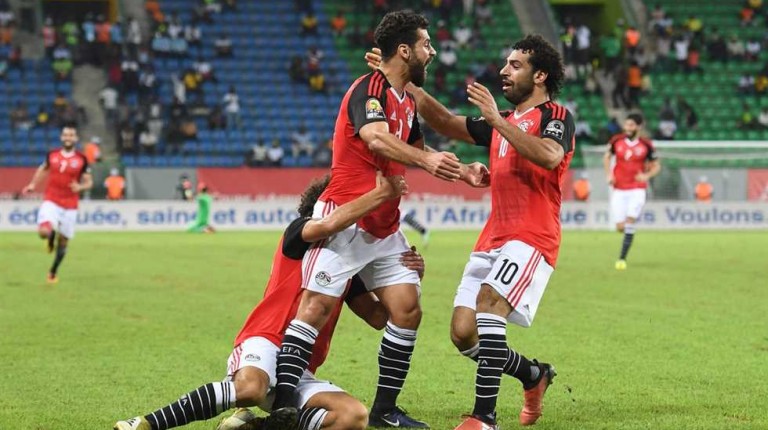 Egypt’s national team can finally take a deep breath after their last-minute win against Uganda 1-0 on Saturday in their second group D game at the African Cup of Nations (Afcon) in Gabon.

The Pharaohs occupied the second place in their group with four points, while Ghana secured its qualification for the next stage with six points after beating Mali and Uganda. Mali came in third place with a single point, followed by Uganda at the bottom of the table with no points.

Egypt’s coach Héctor Cúper did not express happiness after his first win at the Afcon 2017 which was played at Port-Gentil, Gabon.

Cúper told the media after the match that the competition is very intensive in all groups, and that the teams win with a maximum of one or two goals.

He added that the Pharaohs need to make a big game against Ghana to honourably qualify for the quarterfinals, pointing out that Uganda was a fierce competitor. Although the Argentinean coach expected a better performance, he praised the players’ efforts and keenness to win until the last minute of the game.

On the other hand, the coaching staff was worried of the negative effects of high temperature and high humidity on the players, and started to think of a solution, especially as the Pharaohs aim to go further in the tournament.

The staff tends to give a rest to the key players who played against Uganda.

Director of the national team Ehab Leheta spoke about the regulations of the Afcon to be applied in case Egypt and Mali had equal points.

Egypt drew in the first game against Mali and won the second match against Uganda, scoring four points. Mali has a single point and will play against Uganda. In case Mali wins its last match and the Pharaohs lose to Ghana, Egypt and Mali will have four points each.

The Pharaohs can qualify for the quarterfinals in the following cases.

In case Egypt beats Ghana, the Pharaohs would directly qualify for the quarterfinals regardless of the result of the game between Mali and Uganda. Egypt would lead the group with seven points followed by Ghana.

In case Egypt draws with Ghana, the Pharaohs would qualify for the quarterfinals, regardless of the result of the game between Mali and Uganda. Ghana would lead the group with seven points followed by Egypt.

In case Egypt loses to Ghana and Mali beats Uganda, the Egyptian national team’s chances of qualification would be complicated. Egypt and Mali will be ranked according to the greatest number of points obtained in the matches between them, the best goal difference in the matches between them, the goal difference in all group matches, the greatest number of goals scored in all group matches, or the number of red and yellow cards given to each team.

In case Egypt loses to Ghana and Mali draws with Uganda, the Pharaohs would directly qualify for the quarterfinals as Ghana will lead the group with nine points followed by Egypt. Uganda will come in third place with three points, while Mali will be at the bottom of group D with a single point.

In case Egypt loses and Mali draws with Uganda, the Pharaohs would also directly qualify for the quarterfinals as Ghana will lead the group with nine points followed by Egypt with four points. Mali will come in third place with two points, while Uganda will be at the bottom of group D with a single point.

On the other hand, the situation is still unclear in group C, as Congo leads the group with four points after beating Morocco and drawing with Ivory Coast. Morocco came in second place after beating Togo 3-1, while Ivory Coast has two points from two draws with Congo and Togo, which lies at the bottom of the table with a single point. In case the Moroccan national team draws with Ivory Coast, it would directly qualify for the next stage, even if Togo beats Congo, as Morocco leads its opponents in the head-to-head department, followed by Togo.