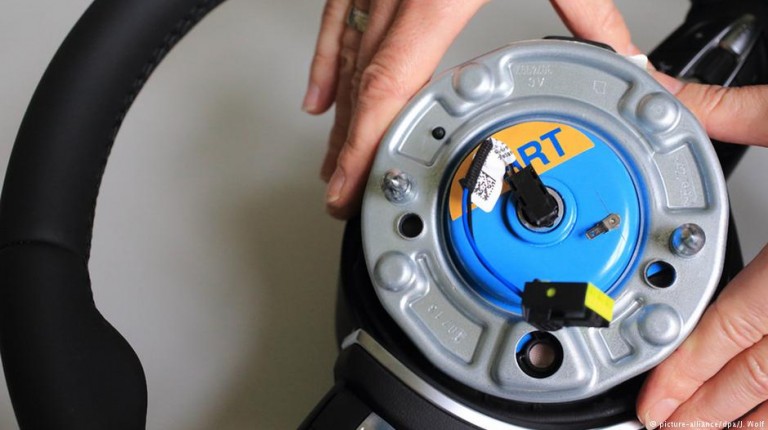 Shares of troubled Japanese airbag maker Takata have continued their downward slide as the company braces for a drawn-out bankruptcy restructuring. The firm is at the center of the auto industry’s biggest recall.Takata shares tumbled again on Monday, diving nearly 18 percent on the Tokyo Stock Exchange on fears of a protracted bankruptcy restructuring for the airbag maker.

The embattled stock, which had lost more than half its value within a week, fell by its daily limit and was untraded again after extending a losing streak to a sixth session.

Takata shares already plunged by 21 percent last Friday, with the Japanese firm at the center of the biggest-ever safety recall worldwide.

The steep drop is linked to reports that two rival suitors will propose bankruptcy restructuring for the airbag maker that recalled more than 100 million inflators globally.

The recall came after the discovery of a defect in Takata airbags that could cause them to inflate with excessive force, sending metal and plastic shrapnel from the inflator canister hurtling toward drivers and passengers.

The problem has been linked to at least 15 deaths and scores of injuries worldwide.

According to media reports, Sweden’s Autoliv, the world’s leading airbag manufacturer, and a consortium led by US auto parts maker Key Safety Systems, are to present their bankruptcy restructuring proposals for Takata any time soon.

Tokyo shares in general fell Monday, with exporters hit as the yen rose sharply against the greenback after Donald Trump started his presidency.

The benchmark Nikkei index lost 1.29 percent. “If the market starts to focus more on concerns over Trump’s protectionist aspects, the yen is likely to temporarily shift toward strength,” Tokai Tokyo Research Institute strategist Shoji Hirakawa said in a statement.

Asian stocks down on Takata’s US deal