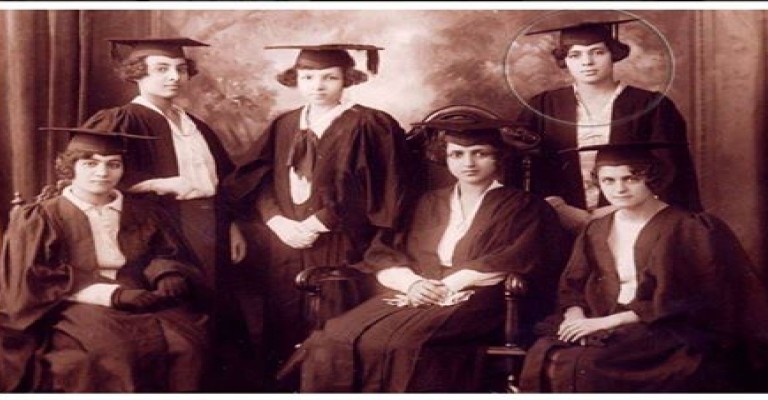 History has the ability to direct and alter the future. A few years ago, Mohamed Abdel Latif found a letter written by his mother in the early 20th century. While the letter was initially a simple method of communication between a daughter and her father, the significance of finding this letter has initiated a domino effect that led to a valuable must-read book.

Tawheda Abdel Rahman was the first female doctor in the Egyptian government. The pioneer was one of the very first Arab females that decided to blur gender-related boarders and specialise in a profession dominated by men.

While her family knew her legacy quite well, the masses rarely heard her name. Accordingly, finding that letter she sent from a hospital in London was a sufficient sign to encourage her son to track her life’s milestones and document them for the coming generations.

“This book almost took three years. I started back in 2000 when I found an old letter my mother had sent to her father from London. My first step at the time was heading to the hospital where she worked in order to track her journey,” Abdel Latif said.

Abdel Latif took the first step by travelling to the United Kingdom in order to find his mother in the hospital’s archives. “When I first travelled to the hospital and told them that my mother worked there in 1922, the archive’s handler told me that it is impossible for an Egyptian woman to have worked there at the time,” Abdel Latif said.

At first they could not find a folder under her name. Nonetheless, after using her nickname, “Ramin”, all the details started to unfold bit by bit. With that said, the handler’s shock of the fact that an Arab woman managed to work as a doctor in Britain at the time only encouraged Abdel Latif to further pursue the intertwined leads and document Abdel Rahman’s journey.

“Step by step, I started connecting bits and pieces from her journals and letters along with her images. Then I created a website about her legacy and accordingly, a book was the natural following step,” Abdel Latif explained.

Despite being her son, Abdel Latif aimed to publish a book that could be used later on as an official reference. Therefore, he chose to collaborate with a writer that can take the stories Abdel Latif knew by heart as well as the documents he found through his travels and turn them into a biography.

“I am not a writer; I do not have the talent to attract readers. Therefore, when I heard about Moemen, I went and bought his books to read his work before meeting him. I thought that I will meet an intellectual person that I will not be able to keep up with as he writes about religion, politics, and art,” Abdel Latif said. However, the two clicked the moment they met.

Moemen El-Mohamady is a well-known writer that has tackled various topics with his previous work; nonetheless, “The Doctor” is his first biography. “I told him about my mother and how I aimed to honour her. I thought he would not agree to write the book since he had never written a biography before. However, to my surprise, he highly welcomed the project and was eager to write about my mother,” Abdel Latif said.

According to the team behind this biography, the book aims to teach young girls determination. Furthermore, it is not necessarily about a certain goal; it is about daring to follow a direction opposite to the norm and dreaming about achieving things further than a certain degree or title.

The book signing event was organised at Bayt El-Sehemy on 30 November. Abdel Latif planned to organise the event then in order to honour her on the same day she was born and later married. Due to Abdel Rahman as well as the book’s national value, the Bibliotheca Alexandrina was naturally involved in the icon’s website; furthermore, they wanted to host the signing event.

“I was already in contact with the Bibliotheca Alexandrina for the website when I started working on the book. When they knew about the biography, they instantly offered to handle the book-signing event,” said Abdel Latif.

Unfortunately, the library was not available on the day. Accordingly, the library’s team suggested moving the event to one of their subsidiary locations: Bayt El-Sehemy. “The team greatly helped me organise the event. They handled all the details; I did not have to exert any excessive effort,” said Abdel Latif.

The book can be found in all major bookstores. Meanwhile, all proceedings are donated to charity, namely the 57357 children cancer hospital, as Abdel Latif chose to further highlight his mother’s personality through associating her biography with a cause that she would have loved to support if she was still alive.