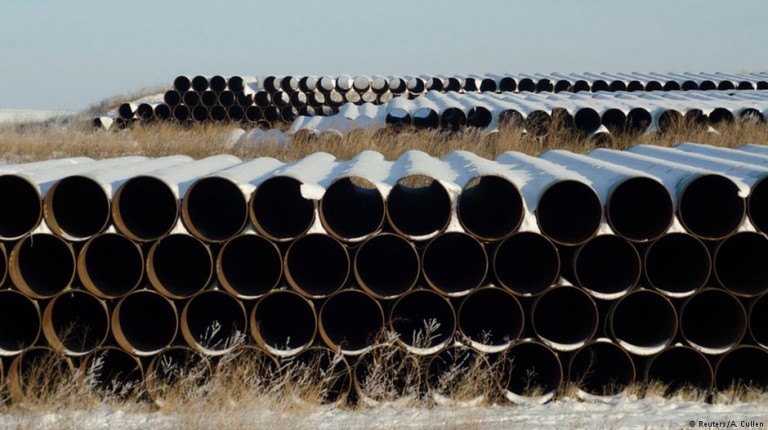 In a move that will enrage climate change and environment activists, Trump has signed an executive order to proceed with the construction of the Keystone XL and Dakota Access pipelines blocked by Barack Obama.President Donald Trump has resurrected the controversial construction of two oil pipelines that his predecessor Barack Obama had blocked on environmental grounds in 2015.

On Tuesday, the new Republican president authorized both projects on the condition that American steel is used, in a move that he claimed would create “a lot of jobs – 28,000 jobs – great construction jobs.”

The Obama administration stopped Keystone, which will carry crude oil from Canada to Texas along a 1,897km (1,178 miles) route, just over a year ago due to concerns over the damage such quantities of fossil fuels would do to the environment.

Meanwhile Dakota Access, an almost identical length pipeline which is planned to transport 470,000 barrels of crude oil a day across four states from North Dakota to Illinois, has attracted controversy not only because of the potential environmental impact but because it disturbs the land of the Sioux Native American people and will potentially contaminate their drinking water.

The Dakota Access Pipeline was the site of protests last year by Native American groups concerned about the impact of the project on their lives. Last month, the US Army Corps of Engineers blocked the construction, calling for alternate routes to be considered.

It was a major victory for the Standing Rock Sioux Tribe, whose protest against the pipeline had gone on for months and grew to nearly 8,000 people. The Native Americans said they opposed the segment of the nearly complete $3.8 billion (3.53 billion euros) project because it threatens burial sites and their water supply.

But Trump was bullish as he signed the order. “We are going to renegotiate some of the terms. And then if they like, we’ll see if we can get that pipeline built,” he said.

The Keystone project had been a long-standing point of dispute between Republicans and Democrats, with the latter rejecting it after years of review because of climate change concerns.

The proposed Keystone XL pipeline was planned to carry oil from Canada’s tar sands in Alberta to the Midwestern state of Nebraska, where an existing pipeline would carry the Canadian oil to refineries in Texas.

“We are pleased to see the new direction being taken by this administration to recognize the importance of our nation’s energy infrastructure by restoring the rule of law in the permitting process that’s critical to pipelines and other infrastructure projects,” American Petroleum Institute President Jack Gerard said.

“Critical energy infrastructure projects like the Keystone XL and the Dakota Access Pipelines will help deliver energy to American consumers and businesses safely and efficiently,” he added.

Environmental group Greenpeace pointed to an alliance of Native Americans, ranchers, farmers and climate activists opposed to the projects.

“Instead of pushing bogus claims about the potential of pipelines to create jobs, Trump should focus his efforts on the clean energy sector where America’s future lives,” executive director Annie Leonard said.

The Canadian Prime Minister Justin Trudeau has cautiously supported the plan, seeing it as a means of boosting business, but risks alienating his supporters as he has also helped wage the international charge against climate change.