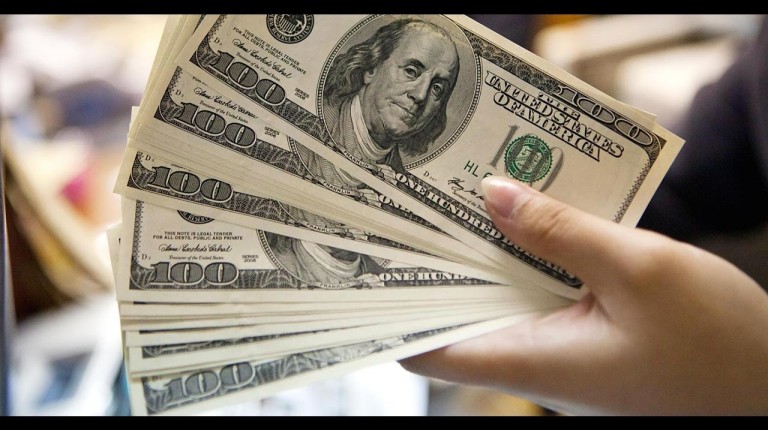 Since the 25 January Revolution in 2011, Egypt’s foreign currency reserves were used to support Egypt’s important imports at a time that witnessed a lack of inflow of foreign currencies.

After four years, President Abdel Fattah Al-Sisi was elected, at a time when Hisham Ramez was the governor of the Central Bank of Egypt. Ramez was ousted and replaced by Tarek Amer in November 2015. 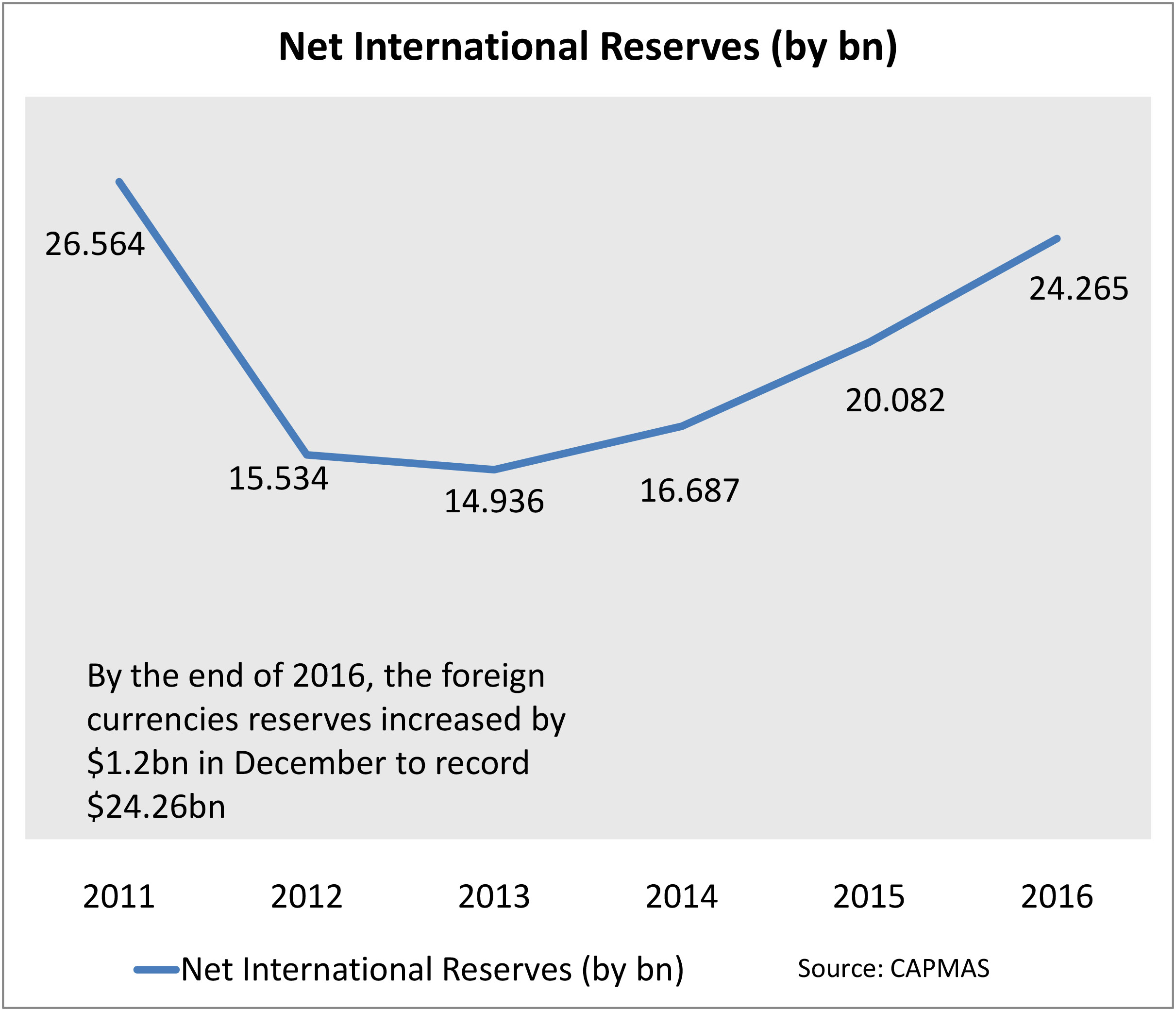 Both governors were aiming to increase foreign currency reserves, and both of them implemented several decisions for that purpose.

However, since Egypt has been signing numerous loan agreements, foreign exchange reserves have been increasing year after year for no main reason.

Daily News Egypt asked experts about the foreign currency reserves and how their amount will increase or decrease over the coming years.

By the end of 2016, foreign currency reserves increased by $1.2bn in December to record $24.26bn compared to $23.06bn in November, which is the highest amount in five years.

Egypt faced instability in its foreign currency reserves since the revolution in 2011. Due to the revolution’s negative effects, reserves have fallen sharply to their lowest in June 2013, as they recorded $14.936bn during the era of former president Mohamed Morsi.

In 2014, reserves slowly increased due to grants from Arab countries like Saudi Arabia, Kuwait, United Arab Emirates, and Jordan.

Since then, increasing the reserves was one of the most important duties of Ramez and Amer.

The challenge both governors faced was working on increasing the reserves under the pressure of foreign currency shortage due to the lack in exports, the absence of tourists, and the declining world trade movement that affected the Suez Canal’s revenues.

Prime Holding said in a statement issued on Sunday that in spite of Amer denying that loans from the World Bank and African Development Bank would be used to increase the reserves, Prime believes that there was no other cause for such a hike.

The statement read that during December, the only income that entered Egypt was the second tranche of the World Bank’s loan.

During December, Egypt received $1bn from the World Bank and $500m from the African Development Bank, each considered a second tranche from the agreed-on loans, to finance Egypt’s economic reform programme, as Minister of International Cooperation Sahar Nasr announced last year.

Prime added that the CBE probably increased its reserves through the income the government received by launching the 4G licences for mobile network operators, and also through selling treasury bills in US dollars and euros.

It stated that in spite of reserve increases, Egypt has to pay $100m to international petroleum companies as a tranche of debt worth of $3.6bn, and $700-900m for its petroleum imports after the cancelation of the Aramco deal with Egypt.

Prime expects that Egypt will pay back $2.4-2.7bn during the current month, of which $720m will go to the creditor group Paris Club.

The company also expected that foreign currency reserves will witness another increase attributed to the government’s will to offer US dollar denominated treasury bills for sale during the current month, as well as receiving the second tranche of the African Development Bank loan in January.

The statement said that Egypt would receive $600m from the G7 group, which includes the United States, Canada, France, Germany, Italy, Japan, and the United Kingdom.

Prime said that there were unofficial statements about repaying a Turkish loan worth of $1bn agreed on September 2012. However, the statement said that the total debt Egypt has to pay until the end of the current fiscal year is worth of $2.8bn. This debt is due to be paid to the Paris Club during January, and Saudi treasury bills by the second half of fiscal year 2016/2017.

From another view point, economic expert Medhat Nafea said that the increase in reserves is mainly attributed to the CBE’s halt of providing foreign currencies to importers for essential goods.

He added that the CBE used to provide financial bids due to the high price of the unofficial market, which allowed importers to keep the same price for essential goods such as medicines, baby formula, and other products and ingredients.

Nafea said that banks are supposed to provide foreign currencies now for the trade and industry sectors which depend on imported products.

He believes that banks and the unofficial market would not be able to fulfill the needs of Egypt’s imports, stating that Egypt’s monthly imports are worth $6.5bn, which is very large amount of money that banks cannot provide.

“The CBE has always been working on increasing the reserves. It does not care about the negative consequences of that,” the expert said.

He thinks that Amer is exchanging Egyptian pounds for foreign currencies from the banking sector to work on that target.

He said that nothing had happened which would increase the CBE’s foreign currency reserves. However, remittances of Egyptians working abroad slightly increased by the end of 2016.

“Egypt’s exports are currently at their worst conditions,” Nafea said, adding that the foreign currency shortage and the lack of importing important components affected the production of a lot of goods that manufacturers export.

“Amer has been targeting increasing the reserves, and as a result, the inflation rate has been hiking. Decisions by the Ministry of Industry and Trade reduced imports, while the demand on commodities and goods is still high, which affected the prices and increased inflation,” Nafea said.

He said that Egyptians lost almost 25% of the value of their money due to the high rate of inflation, while several crises arose, such as a shortage in medicines.

The Central Agency for Public Mobilization and Statistics issued a statement on Tuesday, showing that the annual inflation rate hiked by 24.3% during December.

The expert stated that Amer has to know that increasing the reserves must not be a target, adding that a lot of developed countries do not care about their reserves.

It is important to mention that the International Monetary Fund (IMF) published its expectations about Egypt’s gross international reserves in a statement on Wednesday.

However, Nafea said that the CBE always announces the foreign currency reserves when they are high, before paying back any money for debt, adding that Egypt has to pay millions to the Paris Club during January.

Regarding how safe Egypt’s reserves are, Nafea said that current reserves should not make Egyptians feel safe. If the reserves are compared to foreign debt, they would reach less than 50% of the debt.

He also said that these reserves are not enough to pay for Egypt’s needs for more than four months, which is not a long time.

“The only solution for the crisis of foreign currency is increasing exports. Otherwise, any following decisions would not solve the problem,” he noted.

He also said that attracting foreign direct investment could increase the gap between exports and imports in the trade balance.

He emphasised that capital inflows increase imports, which affect the trade balance deficit.

“The CBE has to cooperate with the government to increase exports, and it also has to create stable policies that aim at helping investors and improve the investment climate,” Nafea noted.

Reham El-Desoki, a senior economist at Arqaam Capital, said that if foreign currency reserves can cover three months worth of annual imports, this is considered an adequate level for an open economy, adding that Egypt needs to secure that level, which is why the CBE is now focusing on replenishing reserves.

She added that the arrival of several amounts of assistance and loans from various development partners has fuelled the rise in reserves in recent months.

“Foreign currency reserves are expected to continue increasing gradually as the economy’s foreign currency sources recover, such as tourism and remittances and more importantly, investments,” she said

El-Desoki expects this to occur at a slow rate as Egypt has multiple short-term obligations and government financing for which it will use the reserves.

The informal market returns to scene of US dollar crisis