The costs of the development and restoration of archaeological projects in the engineering projects division of the Ministry of Antiquities have recorded a noticeable increase with the decision to liberalise the exchange rate of the Egyptian pound. The budget allocated to develop 10 projects this year is estimated at EGP 635.5m, compared to EGP 350.9m before the flotation of the pound.

The Ministry of Antiquities plans to develop, restore, and inaugurate 10 archaeological projects in 2017 within its investment plan for the year.

Engineer Waad Allah Abou El-Ela, head of the engineering projects division in the Ministry of Antiquities, said that the ministry seeks to complete the development and opening of several projects this year, most prominently the development project of Hadabet El-Haram with its three phases, the archaeological area in Abydos, and the Royal Vehicles museum in Bulaq.

Abou El-Ela told Daily News Egypt that the total costs of these projects are currently estimated at EGP 635.5m compared to EGP 350.9m before the decision to float the pound.

He explained that the total volume of cost increase of these projects after the flotation will exceed EGP 231m, which is equivalent to a 57% increase.

The Central Bank of Egypt (CBE) decided to liberalise the pound’s exchange rate against the US dollar in November 2016.

The dollar exchange rate in the banking system has exceeded the EGP 18 barrier, compared to EGP 8.88 before the flotation.

Abou El-Ela noted that starting any project scheduled to be completed by the end of the year depends on collecting the necessary financing. Because of this, no time frame for the completion of a project has been established until the project is started.

He explained that the poor financing as well as the deterioration of antiquities in some sites were some of the main crises faced by the sector throughout the past year.

The cost of the project of Sohag National museum is estimated at EGP 62m, up from EGP 30m. The development cost of Ganem Al-Bahlawan mosque jumped to EGP 6m, compared to EGP 4m.

The allocated cost for the Eissa Al-Kurdi mosque increased to EGP 10m, compared to EGP 6.6m before the flotation. The cost of the development and restoration of the Wekalet Al-Shorbagy mosque in Alexandria reached EGP 79m, up from EGP 51m.

A table illustrating the increase in the archaeological projects’ costs after the pound’s flotation: 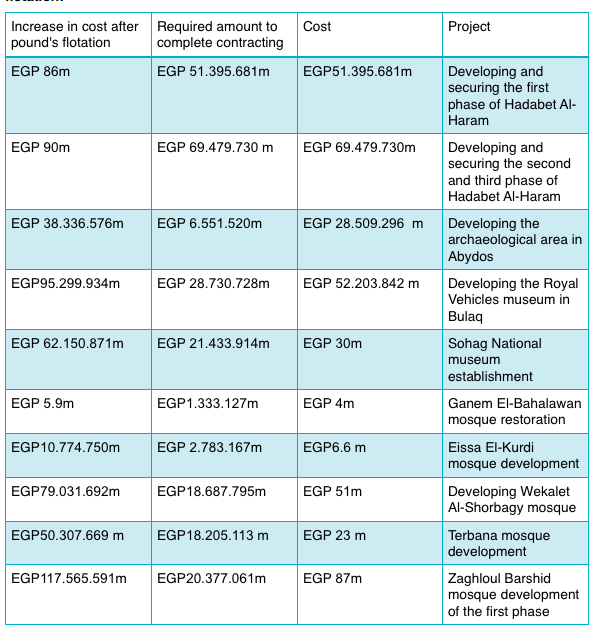