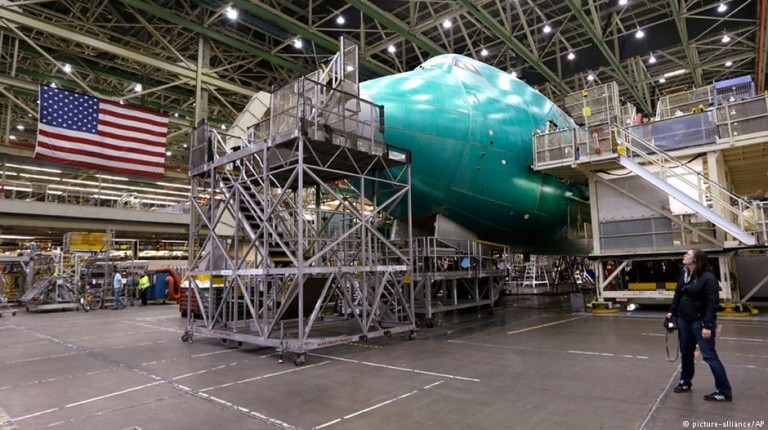 US aerospace giant Boeing has reported a massive surge in fourth-quarter earnings and has projected higher commercial aircraft deliveries in 2017 as it works through a backlog of orders.Boeing’s net income in the final quarter of 2016 rose 59 percent compared with the same quarter in the previous year, reaching $1.63 billion (1.51 billion euros).

On a per-share basis that was net income of $2.59, the Chicago-based company said Wednesday, amid a slight decrease of one percent in revenue to $23.29 billion.

Nevertheless, chief executive Dennis Muilenburg described Boeing’s performance as solid. “We extended our aerospace market leadership in our centennial year and positioned Boeing for continued growth and success in our second century,” he said in a statement.

Boeing shares rose more than two percent in early trading on Wednesday, giving a boost to the Dow Jones, which surpassed the 20,000-point mark for the first time in its history. Boeing investors mainly cheered the aircraft maker’s outlook for 2017.

Boeing announced it expected to deliver 760 to 765 commercial aircraft, which would be an increase over the 748 planes delivered in 2016. The company currently runs a backlog of more than 5,700 aircraft with a sticker value of $416 billion, although airlines routinely get discounts.

Prospected 2017 sales would amount to revenue of between $90.5 billion and $92.5 billion, down from $94.6 billion in 2016, it added. This seems mainly the result of Boeing’s government business which has come under increasing cost pressure recently.

According to company figures, 2017 revenue from its defense and space operations could fall by up to 5 percent, including a drop in sales of military jets.

No increases in ticket prices in the coming period: EgyptAir chairperson

DAE finances purchase of 8 Boeing aeroplanes, leases them to Cairo