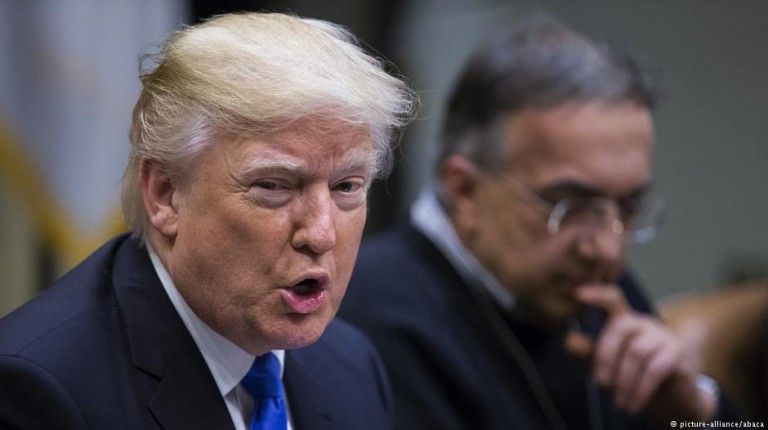 Sales numbers of the dystopian novel “1984” have spiked since Donald Trump took office. Here are four more ways the US president has recently invoked memories of popular entertainment.’Keep America great’

Trump’s presidential campaign, Donald J. Trump for President, Inc., has applied to trademark the phrase he would use for a potential 2020 presidential run. It’s “Keep America Great,” which of course refers to the omnipresent “Make America Great Again” slogan that Trump used in his successful 2016 campaign. But “Keep America Great” sounded familiar to movie buffs for an entirely different reason.

The phrase was the tagline for the 2016 horror dystopian film “The Purge: Election Year.” It is set in a world where crime has significantly decreased in the United States thanks to the “purge,” a government-sanctioned 12-hour window during which all crime is legal and citizens go around violently killing each other as a release for the hatred pent up inside them.

“Election Year” takes place in the run-up to the 2040 presidential election. Before the film was released in the summer of 2016, writer-director James DeMonaco admitted he was influenced by the US presidential campaign.

“I think there’s a lot of representation of everyone who’s in the game right now, from Donald Trump to Hillary Clinton to Bernie Sanders to John Kasich,” DeMonaco told “Entertainment Weekly” magazine. “I think the audience will have a lot of fun saying, ‘Oh, that reminds me of something Donald said!'”

‘1984’ and the administration’s ‘alternative facts’

On Wednesday, January 25, George Orwell’s “1984” was the number one bestselling book on amazon.com. The dystopian novel centers on a totalitarian government that changes history and facts as it sees fit to control the people.

Critics have slammed the Trump administration for presenting inaccurate statements as the truth. The connection between “1984” and Trump first entered mainstream American discourse when he claimed that millions of illegal votes were cast in Hillary Clinton’s favor – an unfounded statement he could not back up with any proof.

Most recently, Trump adviser Kellyanne Conway used language that seemed to be straight out of the famous book. The administration had claimed that the crowd at Trump’s swearing-in was the biggest at any inauguration ever, which crowd counting experts had clearly disproved with the help of overhead photos. Conway claimed the false statements were simply “alternative facts.”

In “1984,” leadership changes basic information on the drop of a hat, for example which nation the main country, Oceania, is at war with. The population is whipped up into a hateful frenzy against archenemy Eurasia when suddenly, it’s announced that Eurasia is an ally – Oceania is at war with Eastasia, of course, and always has been.

The crucial aspect, as noted by protagonist Winston: “There was, of course, no admission that any change had taken place.”

Man of the year

In 2006, Robin Williams starred in “Man of the Year,” a comedy about a talk show host and comedian who runs for president. At first, the political establishment doesn’t take his career seriously, but it soon becomes obvious how much support he has among regular people. The trailer even announces “It’s definitely not politics as usual.” Sound familiar?

The name of the movie is also a title Trump would have liked. The US president was “Time Magazine’s” Person of the Year in 2016, but complained in a speech that it should really be called Man of the Year.

May the odds be ever in your favor

A longer-standing comparison has been drawn between the rise of Trump and Suzanne Collins’ novel, “The Hunger Games.” The story is set in Panem, a world where a rich few rule over the rest of the people with the help of a reality TV show called Hunger Games. Each of Panem’s 12 districts has to send two children who will battle each other until only one is left alive. A best-of is aired on TV daily and is mandatory watching for everyone.

From 2004 until 2015, Trump produced and hosted the reality TV show “The Apprentice.” Because of that, he has been called the first “reality TV president,” a moniker that would also be fitting for President Snow from “The Hunger Games.”

The titular games are about providing good entertainment. Viewers can send the contestants gifts like food or weapons. To receive this crucial support, the teens have to put up a show. The winner of the Hunger Games isn’t necessarily the strongest participant; it’s often the one who was entertaining enough to win over sponsors. Several political pundits have said the same about the US presidential campaign.

Even “The Simpsons” have referred to President Trump – long before he was elected in the real world. In 2000, the animated comedy did an episode set in the future, where daughter Lisa Simpson is president of the United States. She has to deal with a US economy in shambles.

“As you know, we’ve inherited quite a budget crunch from President Trump,” Simpson tells her advisors.

The show’s creator Matt Groening explained in October 2016 why they had decided on Trump as a fictional president all those years ago: “Back in 2000 Trump was, of course, the most absurd placeholder joke name that we could think of at the time.”