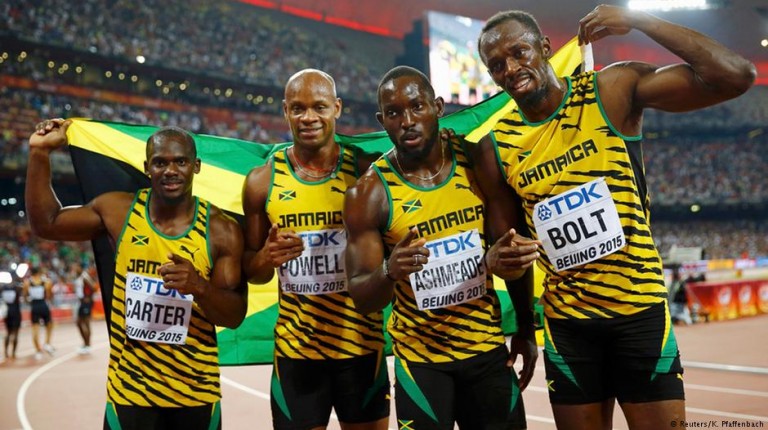 Bolt is one of four members of Jamaica’s relay team who will have to return their medals after one of them tested postive for a performance-enhancing drug. This came in the retesting of samples from the Beijing Games.The International Olympic Committee (IOC) revealed on Thursday it had stripped Jamaica of their 4x100m relay gold meda at the 2008 Beijing Games after a re-analysis of Nesta Carter’s samples tested positive for a prohibited substance.

The decision means that Carter’s teammate Usain Bolt loses one of the three gold medals he has won at the Olympics, leaving the sprinter with eight gold medals and without the triple treble (100, 200 and 4×100 meter gold medals) title of before.

“I want to share it with my team,” said Bolt said at the time after completing that treble in 2008. “It’s down to them that I beat the world record today. When you beat the relay world record, you feel four times happier.”

Re-testing is part of the IOC’s attempt to clean up athletics and provide “a level playing field” for all athletes. These re-tests started back in 2015 and include analysing samples of athletes from the 2008 Beijing Olympics and the 2012 London Olympics.

Carter was found to have tested positive for the banned substance Methylhexanamine – once used in nasal decongestants but now more commonly found as an ingredient in dietary supplements. He now faces a ban from world athletics’ governing body, the IAAF.

Russia’s Tatiana Lebedeva was also found to have taken a prohibited substance (Chlorodehydromethyltestosterone – a steriod) and therefore loses both her silver medals from the 2008 women’s triple jump and long jump.