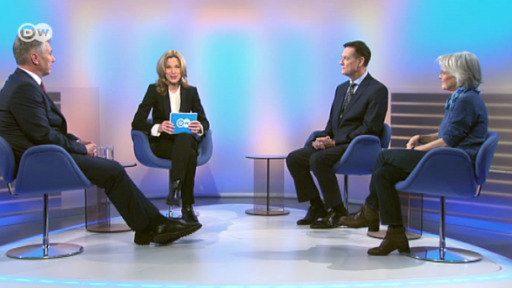 DW spoke to economist Thomas Sampson from the London School of Economics ahead of British Prime Minister Theresa May’s visit to the White House. She is the first world leader to meet the new US President Donald Trump.On Friday, British Prime minister Theresa May will be the first foreign politician to meet US-President Donald Trump. The visit is highly symbolic: inviting May, who vowed to lead her country out of the EU, as the first European leader to the White House is a calculated snub towards the EU. And for May, any promise of a bi-lateral trade agreement with the US could be a welcome lever in upcoming Brexit talks with the EU. DW spoke to economist Thomas Sampson from the Centre for Economic Performance at the London School of Economics, an expert in international trade relations.

DW: Thomas Sampson, can Theresa May expect to reach any substantial agreement?

Thomas Sampson: She’s hoping for an agreement to start talking. Until the UK actually leaves the EU, it can’t make trade deals with other countries anyway. There are limits on what can be agreed. What May wants is to come back and say to the British people: We don’t have a deal yet, but Trump is open to talk about a free trade agreement once we’ve left the EU. That’s her goal.

Clearly, Theresa May is keen to make this trip worthwhile. Could the US replace the EU as Britains biggest trading partner?

The US is one of the UK’s biggest trading partners, but significantly smaller than the EU. Half of the UK’s total trade is with the EU, and that is nearly four times as much as they trade with the US, which came to just 140 billion pounds in 2014.

Will Britain get a better deal for trade with the US than it enjoys now?

That is possible. At the moment, the US and the UK trade under WTO [World Trade Organization] terms. The EU and the US do not have a special agreement at the moment. They were trying to negotiate one under the Obama administration, TTIP, but the consensus now seems to be that TTIP is dead. So any deal the UK reaches with the US would better than what it has at the moment.

Is Britain aiming for a mini-TTIP?

I don’t think that any deal would be as ambitious as TTIP. That would have been quite wide-ranging, and not just cover tariffs, which are very low at the moment anyway. So there’s limited scope for further gains from lowering tariffs. The big prize would be reducing non-tariff barriers, regulatory harmonization for example. But it seems unlikely that those issues would be tackled in any UK-US agreement. Trump’s administration is not open to do those deals.

So it is not unlikely that May comes home with a promise of a deal?

Yes, but mainly because the scope will be less ambitious. I expect the talks will mainly be about cutting tariffs, which are very low anyway. And there isn’t much threat to US industry in doing a trade deal with the UK, so that would be fairly uncontroversial. The one area that could be difficult is what happens to tariffs on agricultural trade. But I’ve heard nothing that suggests that would be included in the talks.

If May reaches a good initial handshake agreement with Trump, will it add leverage to Britain in the upcoming Brexit talks?

One the one hand, May will try to sell any progress she makes with Trump as proof that Brexit enables Britain to get the kind of deals that the EU hasn’t been able to achieve. On the other hand, there’s a risk that she just further antagonizes EU leaders and that could lead to a tougher negotiation stance on the EU side. Britain probably does not have a very strong stance in the negotiations with the EU. And so far, Britain hasn’t been very diplomatic in terms of trying to work together with the EU. There’s a risk that [talks with Trump] could backfire.

Is there still a “special relationship” between the UK and the US?

People in the UK think there is. But when you talk to people from the US, you realize that the US-UK relationship is much more important to people in Britain. Obviously, there are cultural and linguistic links across the Atlantic that lead to some sort of closeness, but I don’t think the UK is a top priority for the United States, economically speaking.

How is the UK being viewed in Trump’s administration?

There’s a great level of uncertainty about that. One thing we’ve learned is that you shouldn’t expect fully coherent policy approaches from the Trump-administration. That said, it seems that Trump broadly has positive feelings towards the UK and in particular towards Brexit, which he seems to see as a kind of insurgent uprising, similar to his own campaign. To put it another way: Trump seems to more often be driven by things he doesn’t like than by things he likes, and he clearly doesn’t like the EU. That could motivate him to reach a deal with the UK, if that would be against the EU’s interests.

Does the current US administration view Europe more as competition than as partners?

Compared with the Obama administration, yes. But there are also people within the White House that have a more traditional view of what US foreign policy towards Europe should be. It’s too early to say which side will win in determining the direction. In the long run, you would expect that there will come the realization that on many issues, the EU and the US are natural allies. Right now, that seems to be obscured somewhat.

Will Trump use Britain to destabilize the EU?

Some of his words suggest that he sees a trade deal with the UK as a way to thumb his nose at the EU. But at the same time it’s unlikely that he really wants to destabilze the EU in the long run, that clearly would not be in the US interest. There’s a lot of posturing going on.

Can the EU influence negotiations between the UK and the US?

One interesting thing to watch out for in the near future is what kind of relationship Angela Merkel will have with Trump. His personal relation to other world leaders will influence his policy decisions. If Merkel manages to have a positive relationship with Trump, that might influence him to work with the EU in various areas – but they are yet to meet.

Egypt will not keep quiet until truth is revealed in Regeni case: Saeed