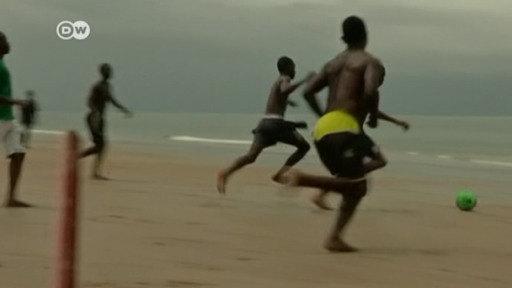 As the 2017 Africa Cup of Nations enters its decisive phase, the tournament remains controversial in its host country. According to critics, its only purpose is to distract attention from Gabon’s huge social problems.Hundreds of fans fill the streets in front of the 40,000 capacity Stade d’Angondjé in Libreville, the largest stadium at the African Cup of Nations in Gabon. They come from Cameroon, Burkina Faso, Algeria, Tunesia – or from the host country itself, Gabon. The sound of trumpets and car horns fills the air whilst the colorfully-clad supporters sport hats and flags to show their allegiances.

One lady, who has a Gabonese flag painted on her cheek, has a message: “It’s great for us that the cup is in Gabon,” she told DW. “Obviously it was difficult after the turbulent elections but now we have a chance to come together as one people.” Gabon, this little known country in central Africa, might be hosting one of the biggest sporting events of the year but it is also in crisis – politically and economically. The Africa Cup of Nations has come at just the right time.

Street battles after the election

At the end August, President Ali Bongo Ondimba was re-elected with a wafer-thin majority – and the opposition suspected corruption. Independent European Union observers also cast doubt on the result asviolent clashes spread through the streets. According to the government, the death toll ranged from three to seven. The opposition spoke of hundreds. The Bongo dynasty has been in power in Gabon for almost 50 years.

More than one in five out of work

Gabon’s largest university is called, unsurprisingly, Omar Bongo – after the former long-serving president and father of the current incumbent. Professor Noel Bertrand Boundzanga is an author who teaches at the university. But he is nothing like the cautious analyst you might expect. “We are not anti-football,” he told DW in no uncertain terms. “We love football! But you simply cannot invest over 700 million euros ($748 million) in football when the country is in the grip of a political and economic crisis. When schools don’t have enough desks and chairs and when hospitals are short on medicine. There’s a shortage of everything.”

Gabon’s lifeblood is oil. When the price of the black, liquid gold drops, Gabon suffers. Unemployment has soared to well over 20% as tens of thousands of people have been redundant. Even the school year started a month late because there was no money to pay the teachers.

But the government insists that the Cup of Nations is not an attempt to polish up Gabon’s wretched image. The country’s sports minister, Yolanda Assele-Ebinda, emphatically denied such claims in an interview with German public broadcaster ARD. “We have a president who worships football and sport in general,” said the minister. “Since he’s been in office, he has used sport as a shop window for our country. Events like the Africa Cup of Nations help to build our infrastructure.”

President Ali Bongo Ondimba then invites the German journalists to an exclusive interview in his palace – and he’s not alone. Pierre-Emerick Aubameyang, Borussia Dortmund star and Gabon’s national hero, is also present. “I think it’s a great thing to have the Cup of Nations here,” he said, sticking to the official line. “Football can help us reunite our country.”

His president on the other hand is effusive. “We have used the tournament as a project for the economic development of the entire country,” he explained. When asked if two brand new stadia were really necessary in such a small country, he responded: “Of course! This infrastructure won’t go to waste, particularly around the stadia. In Port Gentil, for example, we have built many new roads.”

The Africa Cup of Nations held in a nation in crisis. 700 million euros invested in new stadia, ostensibly for the football fans of Gabon, but more realistically to appease a president’s vanity. The stadia are largely empty. Many ordinary Gabonese are boycotting the tournament. This is the reality behind the facade.