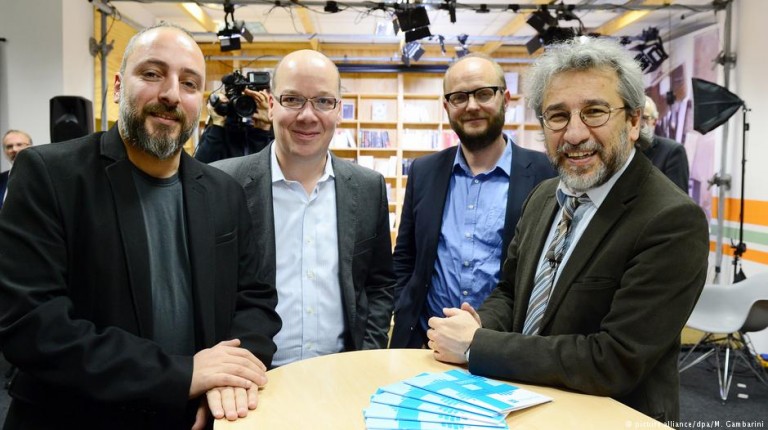 Turkey has reportedly banned access to the bilingual news website “Özgürüz,” which had only been launched earlier in the week. Editor-in-chief Can Dündar said, he had expected as much.Editor-in-chief Can Dündar (pictured, far right) had indicated in an interview earlier in the week that he was anticipating Turkish authorities to block access to his new “Özgürüz” news platform, which publishes news from Turkey in both Turkish and German.

“The Turkish government will do anything to block us, to stop us. But I was in jail and wasn’t allowed to give interviews or publish articles then, and I still managed to. So if I managed to succeed in jail, I can do it now,” Dündar said on Tuesday, when the website was launched.

Published by “Correctiv,” an investigative non-profit organization, “Özgürüz,” which translates as “we are free,” was apparently blocked by Turkey’s official Information and Communications Technologies Authority (ICTA) overnight before even publishing its first story. ICTA referred to Turkish legislation enacted in 2007, designed to ban access to websites “suspected of inciting crimes.”

“Özgürüz” co-founder Hayko Bagdat (pictured above, far left), who, like Dündar, faces persecution in Turkey for his professional work as a journalist, tweeted a screeshot of the ICTA message displayed when attempts are made to access the site from within Turkey.

Can Dündar had risen to international attention in 2015 after being detained for many months in Turkey following allegations of “divulging state secrets” and “spying in aid of terrorist organizations.” As editor of the pro-Western “Cumhuriyet” newspaper, he had published a report on covert Turkish weapons exports to rebels in Syria, which allegedly were sponsored and conducted by Turkey’s National Intelligence Organization (MIT).

After being released from pre-trial custody, Dündar decided to leave Turkey before being handed a six-year prison sentence in absentia. In Berlin, he started working on the launch of his new “Özgürüz” format to provide uncensored news about Turkey.

His colleague Hayko Bagdat has also been forced into self-exile in Germany, having written articles critical of President Recep Tayyip Erdogan.

Turkey jailed more journalists in 2016 than any other country, resulting in Reporters Without Borders (RSF) and the Committee to Protect Journalists (CPJ) branding Turkey as the worst country for media freedom. Around 150 journalists are presently incarcerated in the country; those on trial face charges including espionage and aiding and abetting terrorism. The clampdown on journalists is widely seen as an extension of the ongoing purge on dissidents in the wake of the July 15, 2016, failed coup in Turkey.