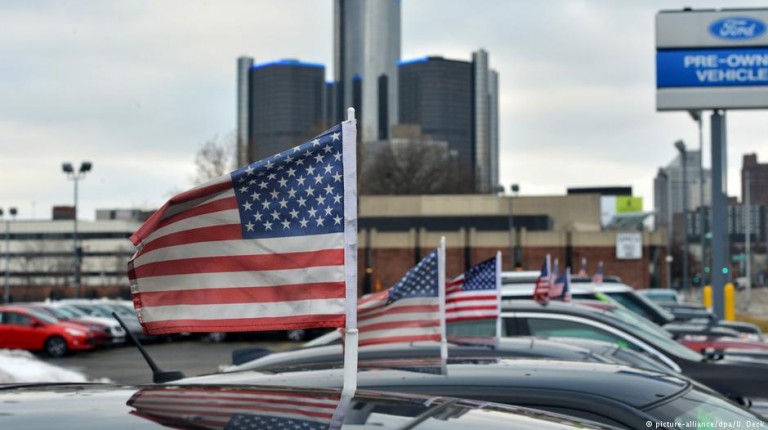 The US economy slowed sharply at the end of 2016 as a plunge in shipments of soybeans weighed on exports. But steady consumer spending and rising business investment suggest the economy will continue to expand.According to a first estimate of US gross domestic product (GDP), the world’s biggest economy expanded by 1.9 percent between October and December 2016, well below the 3.5 percent rate recorded in the third quarter.

For the full year, the US Commerce Department’s data released on Friday, showed a growth rate of just 1.6 percent, meaning it was a full point below the 2015 rate.

“The deceleration of real GDP in the fourth quarter reflected a downturn in exports, acceleration in imports… and a downturn in federal government spending,” Commerce Department said in a statement.

At the end of 2016, exports fell at a 4.3 percent rate, the biggest decline since the first quarter of 2015 and reversing the 10-percent increase notched in the third quarter. Most of the hit came from soybean exports, which had fuelled growth in the Fall quarter after a poor soy harvest in Argentina and Brazil.

On the other hand, imports rose eight percent, meaning those two factors combined to slice 1.7 points off GDP – the biggest drag since early 2010. Federal spending also fell, down by 1.2 percent.

But the economy was buoyed by consumer spending, which picked up 2.5 percent, as disposable household income increased 3.7 percent in the fourth quarter after a robust 4.1 percent rise in the prior period. Savings dipped to $791.2 billion (739.2 billion euros) from $818.1 billion in the third quarter.

Moreover, business investment shifted into higher gear, with spending on equipment increasing at a 3.1 percent rate after four straight quarterly declines. The gain reflects a surge in gas and oil well drilling, in tandem with rising crude oil prices.

On balance, the US economy appears set to improve further this year because of near full employment which is starting to lift wages and supporting consumer spending that accounts for two-thirds of US growth. The economy could also get a boost from President Donald Trump’s pledge to increase infrastructure spending, cut taxes and reduce regulations.

Even though the controversial president has offered little detail on his economic policy, his promises have been embraced by consumers, businesses and investors. Consumer and business confidence have soared, while the US stock market has rallied to record highs.

Nevertheless, there’s also mounting uncertainty over Donald Trump’s trade policy which might turn out to become a major risk to growth. He has cancelled negotiations for the TPP free-trade agreement with 12 Asian nations, and has threatened to slap 20 percent import duties on goods made in Mexico.