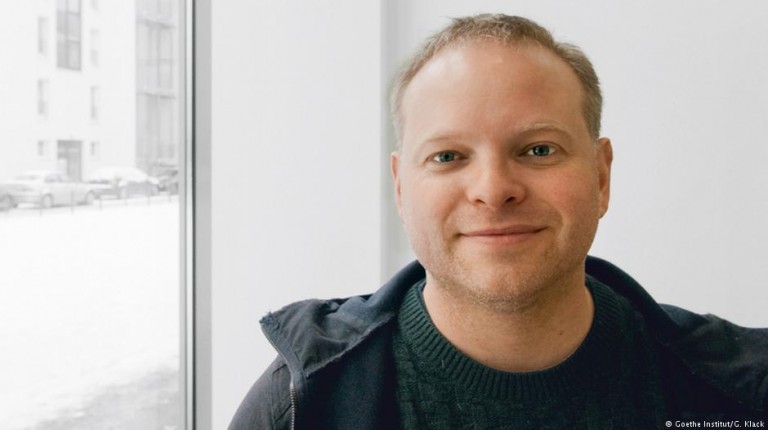 German-Icelandic novelist Kristof Magnusson is a pioneer. Hoping to reach a wider audience, he decided to write a book in simple German. But how is it different from his usual work?Sentences with a simple structure and strong verbs, but no long, cumbersome nouns are easier to understand – both for language learners and those with cognitive disabilities.

The Frankfurt Literature House has launched an initiative to prove that literature doesn’t necessarily have to be wordy and ponderous. If it follows certain rules, even people who have difficulty reading can understand the texts. In Germany, that amounts to a whopping 13 million people, according to estimates. Projects to facilitate access to information are on the rise.

German-Icelandic author and translator Kristof Magnusson, one of the authors involved, wrotes a crime thriller in easy German.

DW: You’re a writer, but you are also a church musician – should books be as easy to understand as church music?

Kristof Magnusson: That’s hard to compare. Music after all needs no words, nor does it need translation – that’s what makes it so magical. What is so grand but also difficult about language is that we must constantly translate. On the one hand, that’s a hindrance, because you can’t simply spread it everywhere. But having to translate is also a great opportunity for cultural understanding and harmonization. What starts out a big disadvantage becomes a big virtue.

You’ve written about the financial crisis, and you’ve written a medical novel. Your most recent texts are in simple German – what are they about?

The texts I write in simple German deal with other topics. That’s what makes the Frankfurt Literature House project to attractive. Yyou don’t take classics and rewrite them in easy-to-understand German – we write something new in simple German from the start.

I take a different approach to topics when I know I want to tell them in easy German. For instance, I decided to write about the murder of Rosemarie Nitribitt, a Frankfurt prostitute in the 1950s. That is a really interesting story, and it is easy to tell. It’s about sex and violence; everyone gets that.

The debate about inclusion in Germany has led to efforts to make more information accessible to people with disabilities. What does that mean for you as a writer?

I try to make sure that every sentence has only one statement. When I use difficult words like “alibi,” I try to explain them without being too obvious. I try to tell a story in a simple way, usually from just one perspective, and not using too much reflection, and then I figure out what to write instead.

Motives played a large role in the Rosemarie Nitribitt text. Nitribitt has a black Mercedes with red leather seats and white hubcaps and a white poodle. So there is this Snow White imagery – as white as snow, as red as blood and black as ebony. These were strong images in the text. Suddenly, this poodle kept popping up, then the car. Trawling for customers in her fancy Mercedes sports car was Nitribitt’s specialty. It was curb crawling turned upside down, since the customers got into her car. That’s pretty particular.

Working with simple language is interesting. Aspects emerge that you might otherwise never have thought of.

If you adhere to these rules, doesn’t that restrict your particular voice, your literary way with words?

No, it’s an entirely different kind of work. In the 20th century, artists did it all the time. They would forbid themselves certain things just for the fun of it, or as an experiment to see what would happen. Take the Oulipo movement in France with its self-imposed limitations. Georges Perec, for instance, wrote a novel without using the letter E.

The producers of the film “Dogma” decided to do without artificial light and only use music and props available on the set. Of course that means you work differently, but it’s no loss; it’s an experiment.

So it’s an artistic experiment. Do you envision any particular audience when you’re writing?

No. That’s impossible, since there is no single target group. The texts are supposed to be suitable for language learners, people with cognitive impairments, or people who find reading difficult, or people with Down syndrome. They might even be interesting for the hearing impaired, because you can do readings that are easier to translate into sign language. They could be interesting for many groups, including literature buffs who just want to see what the experiment is all about.

If we look at Donald Trump’s election campaign in the US and far-right populists in Europe, they tend to use simplified vocabulary. Would you say that simple language is the future?

No, I’d draw a line here. It’s always about speaking in a way that is appropriate in a certain situation. As a translator, I have many stops I can pull, and I use whatever works for the literary text at hand, for its mood and temperature. That’s how I work as an author, too. Simple language is just one of the choices. And they are never bad or good, they are just chords you can tap.

Kristof Magnusson, born in 1976, is a German-Icelandic novelist and translator. He lives in Berlin.

The writer is a doctor trying to diagnose the diseases of societies: Abdallah