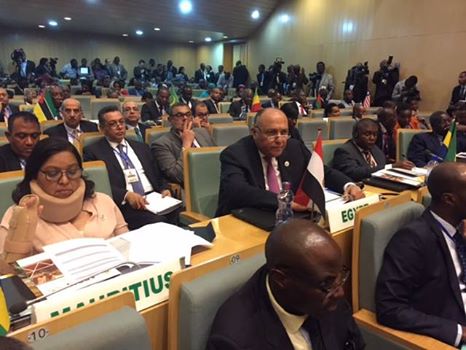 Egypt’s Foreign Minister Sameh Shoukry led a meeting with a number of his counterparts, in which they reviewed the development of their countries’ policies in the areas of democracy, political, economic, and management of private sector affairs on Saturday.

Over the past two days, Shoukry also held a number of individual meetings with his counterparts from different countries on the sidelines of the 28th African Union (AU) Summit. All the meetings focused on bilateral relations.

The minister’s meetings included discussions on bilateral relations, topics that would be discussed during the summit, the election of the AU commission, and other regional issues.

During Shoukry’s meeting with Moussa Faki, Chad’s foreign affairs minister, the discussion revolved mainly around the election of the AU commission. Both ministers also stressed the importance of coordination between the two countries.

In his meeting with the Rwandan foreign minister, Louise Mushikiwabo, the two spoke about bilateral relations and a number of regional issues of common interest, in particular the institutional reform of the AU and cooperation between the Nile Basin countries.

Shoukry thanked the minister for hosting the previous AU Summit in the Rwandan capital of Kigali in June-July 2016.

He also expressed his gratitude for the positive developments in bilateral relations between the two countries, stressing the need to work on increasing Egyptian investments in trade in Rwanda by removing all restrictions hindering it.

Egypt is keen on cooperating with Rwanda in all fields, including military and security cooperation and the fight against extremism and terrorism, Shoukry said.

He also referred to the prominent role of Al-Azhar and its efforts to fight extremist ideologies and spreading the teachings of Islam.

Shoukry met with the Ethiopian foreign minister and reviewed the path of bilateral relations, and agreed on enhancing coordination in African issues raised on the agenda of the United Nations security council as the two states have council membership. They also agreed on coordination regarding the tripartite negotiations surrounding the Grand Ethiopian Renaissance Dam, and discussed topics on the agenda of the AU meetings.

Regarding Shoukry’s meeting with the Sudanese foreign minister, discussions focused on trade cooperation as they addressed ways to develop bilateral cooperation between the two countries in all fields.

Shoukry expressed Egypt’s desire to convene a meeting of the political, security, and consular committee, to be headed by the two foreign ministers in Khartoum, to follow up on both countries’ relations.

The meeting also discussed the importance of considering lifting all restrictions on Egyptian agricultural exports and reconsidering the negative lists of goods that will support the joint trade between the two countries.

The Egyptian minister discussed bilateral relations with the Congolese foreign minister, and emphasised the strength and durability of the historical relations between the two countries. Shoukry also expressed the aspiration of Egypt to receive the president of Congo in Cairo soon.

Shoukry also met with the Algerian foreign minister Ramtane Lamamra and discussed a number of topics of mutual interest and regional issues, particularly the situation in Libya. They also discussed the scheduled election for the AU Commission.

The Algerian minister reviewed Egypt’s efforts to settle the situation in Libya, especially the preparation of the trilateral summit that included Egypt, Tunisia, and Algeria. He also referred to Egypt’s efforts to organise a meeting in Cairo for high-ranking Libyan leaders.

The minister concluded his statements by stressing the importance of the neighbouring countries’ participation in discussions on Libya’s situation.

The summit started on 26 January in Addis Ababa, the capital of Ethiopia, and will end on 31 January. President Abdel Fattah Al-Sisi will participate in the final meeting of the summit.

Libya’s neighbouring countries should find solutions to its turmoil: Shoukry