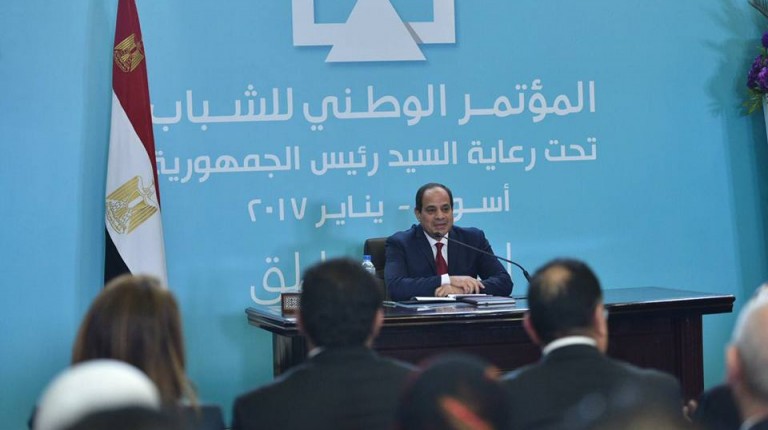 The second state-sponsored National Youth Conference came to an end in Aswan on Saturday, during which President Abdel Fattah Al-Sisi took questions from several attendees.

Al-Sisi asserted on Saturday morning that the main goal of the meetings held on a monthly basis with youth is to prevent the strife caused by the schemes of “evil people.” Al-Sisi’s comments came during a live stream of the second day of the conference.

“Evil people are working hard to engage Egyptians in troubles,” Al-Sisi claimed. “They are promoting the idea that the current regime is not working in favour of the citizens on a regular basis. Moreover, they are trying to destroy the country by using us,” he said.

During the conference, Al-Sisi met with 150 young people in Upper Egypt and discussed the current issues facing the Nubian community following recent protests that erupted in November 2016.

Al-Sisi responded to a question on the government’s deliberate negligence against the Nubians by saying that Nubia is part of Egypt and that the state is working hard to develop it. He added that he state is currently working on the establishment of a development apparatus to follow up on projects planned to be established there.

Earlier in November 2016, Nubians began a protest in rejection of the state’s 1.5m feddans reclamation project. This endeavour, planned by the Egyptian Countryside Development Company, will see 10 acres from two villages in Aswan sold for investments.

Meanwhile, Al-Sisi stated during the conference that Egypt is capable of curbing all strife and that its people will remain unified to achieve the progress and prosperity Egyptians aspire to.

He moreover asserted that one of the main reasons behind the government’s inability to provide services to citizens is that the state was not able to get the fees for that service.

“Tourism in Egypt depends on safety and peace,” Al-Sisi said. “The tourists who come to Egypt should feel safe, and so they will come and pay. If the tourism sector had been stable over the past 40 years, the state would have achieved self-sufficiency.”

During the discussions, Al-Sisi noted that overpopulation is eroding any economic development and that this phenomenon is presenting a huge challenge that should be faced, the presidency statement said.

On the first day of discussions, Al-Sisi spoke about the recent efforts exerted by the government to put sanitation stations in 4,500 villages around Egypt at a cost of EGP 180bn; however, with the population growth these villages will be in dire need of sanitation services.

In response to questions regarding Egypt’s position on the Grand Ethiopian Renaissance Dam (GERD), Al-Sisi said cooperation is still ongoing with Ethiopians according to the Principles Declaration on the dam.

“The responses in any matter related to statements on that case should be carefully studied; concerns of Egyptians regarding the GERD are legitimate. The Nile River has been part of Egyptians’ lives for thousands of years. It is a matter of life or death that no one can tamper with,” he explained.

Regarding discussions of the US administration on a possible transfer of the US embassy from Tel Aviv to Jerusalem, Al-Sisi said that Egypt is working to ensure that such a move would not complicate the Palestinian issue any further.

“Our position regarding the Palestinian issue is clear,” said Al-Sisi. “It is a critical point in the history of the region, and the Palestinians should be granted peace.”