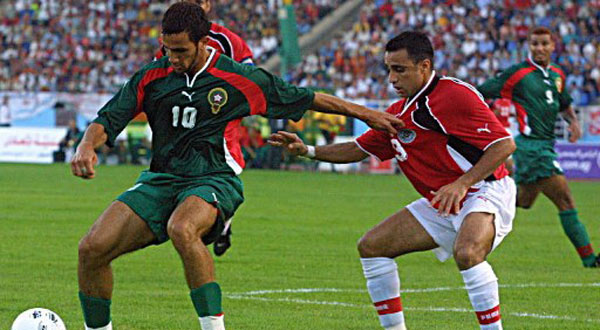 The Confederation of African Football (CAF) announced that the expected match between Egypt and Morocco in the Africa Cup of Nations quarterfinals will be held in Port Gentil stadium on Sunday.

The Pharaohs have qualified for the quarterfinals in this year’s competition after defeating Ghana and Uganda, and drawing Mali, to finish at the top of group D, with seven points, two goals, and a clean sheet.

The Atlas Lions had secured their quarterfinals spot after beating Togo and the Ivory Coast, and losing to Congo. Morocco finished second in group C, scoring four goals and conceding two goals.

It is the ninth time for Egypt to reach the quarterfinals in the tournament since the CAF approved it in the 18th edition held in Senegal in 1992.

The Pharaohs aim to break their non-winning streak against Morocco, which has continued uninterrupted since 1986 when Al-Ahly former forward Taher Abou Zeid scored the winning goal against the Atlas Lions in the semifinals of the African Cup of Nations held in Egypt.

Historically, Egypt has an abysmal record against Morocco, having won just two games while losing 13. There have been 11 draws. The last time Egypt won was in 1986, while the last win for the Atlas Lions over Egypt was in the World Cup qualifiers in 2001. The last official match between the two North African rivals was in the African Cup of Nations 2006 held in Egypt and ended in a goalless draw.

There were five clashes between the Pharaohs and the Atlas Lions in the African Cup of Nations. Morocco has won three games and lost one, while the last game ended in a goalless draw.

The Egyptian national team also seeks to continue its longest unbeaten run in the African Cup of Nations, as the Pharaohs have not been defeated in the last 22 games. Their last defeat came at the hands of Algeria in February 2004.

The Pharaohs will play the next game in the knockout round with special techniques aiming to win regardless of the performance as only winners go on to play in semifinals.

Egypt coach Héctor Cúper has tried during the last two days to find the weaknesses of the Atlas Lions and determine the game plan. It is expected that Egypt will play one-touch football to break the solid defence line of Morocco.

The Pharaohs rely on the cohesion of the team’s three lines, notably the defence line led by Ali Gabr and Ahmed Hegazy. Al-Ahly defensive midfielder Ahmed Fathy, who plays in the left-back role due to the absence of Mohamed Abdel Shafy, and Hull City midfielder Ahmed El-Mohamady will bear the burden of blocking Moroccan offensives from the wings.

The Pharaohs are expected to play on Sunday with the same squad which played against Ghana in the final match in group D, with the possibility of replacing Marwan Mohsen with Mahmoud Abdel-Moneim “Kahraba” in the forward role.

Cúper demanded his players focus on their next match against the Atlas Lions as there is no alternative to winning in order to move forward to the next stage.

Cúper also demanded his players forget about the previous games between Egypt and Morocco, as only they can decide the fate of the game. The Argentine coach’s words boosted the morale of the Pharaohs who aim to beat Morocco and stop the non-win series which has lasted for 31 years.

Participation in the African Cup of Nations: 23

Participation in the African Cup of Nations: 16

Head-to-head records of Egypt against Morocco