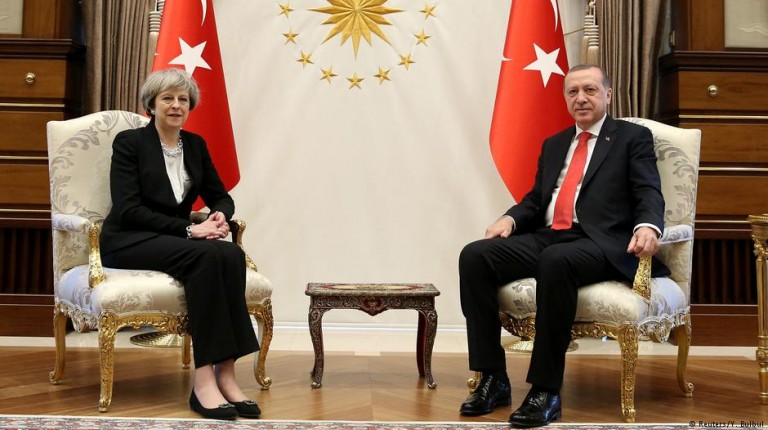 UK Prime Minister May is meeting with Turkish leaders in Ankara to discuss trade and security, a day after talks with the new US president. Her visit comes as the UK seeks to strengthen its hand in Brexit negotiations.British Prime Minister Theresa May arrived in Turkey on Saturday to meet with Turkish leaders in Ankara, as Britain attempts to expand its ties beyond the European Union before it leaves the bloc.

In a gesture that has become a tradition for visiting leaders, May began her one-day visit by laying a wreath at the mausoleum of the founder of modern Turkey, Mustafa Kemal Ataturk.

May is to hold talks with both President Recep Tayyip Erdogan (photo above) and Prime Minister Binali Yildirim during what is her first visit to Turkey since becoming prime minister.

Her spokeswoman said May and Erdogan would talk about increased security cooperation and about a new trade relationship post-Brexit.

Some EU states have shied away from sending officials to Turkey since a failed coup on July 15 brought a harsh government crackdown in its wake, with some 40,000 people being jailed pending trial and more than 100,000 suspended or dismissed from the military, judiciary and public services.

‘Not afraid of any issues’

British MPs have also urged May not to let her eagerness to strike good trade deals with Ankara override concerns about possible human rights violations.

When asked whether May would speak about human rights concerns during her visit, the spokeswoman said that Britain had “expressed our strong support for Turkey’s democracy and institutions following the coup.”

“But we have also been clear that we urge Turkey to ensure that their response is proportionate, justified and in line with international human rights obligations,” she said, adding that she did not “think there are any issues that the prime minister is afraid to bring up.”

Britain is the second most important country – after Germany – for Turkish exports, buying 9.9 billion euros ($10.6 billion) worth of Turkish goods in 2015.

Turkey has long aspired to be a member of the European Union, with Britain seen as one of its most enthusiastic supporters. But now that support in the EU for Turkish accession is on the wane amid concerns about the country’s political and human rights situation, and Britain itself is due to leave the bloc within the next few years, both nations are looking to bolster relations with non-EU states.

British Foreign Minister Boris Johnson also visited Turkey just three months after Britain voted in June to leave the EU, saying during his stay that London wanted a “jumbo free trade deal” with Ankara. Any possible embarrassment over his being the author of the winning entry in an offensive poetry competition about Erdogan earlier in the year seemed to do nothing to dampen his enthusiasm.

As part of the UK’s bid to reinforce its trade reach beyond the borders of the EU, May met on Friday with newly inaugurated US President Donald Trump, with Trump saying he would work with the British premier to lay the groundwork for a bilateral trade deal.

Trump, who has often voiced his opposition to supranational alliances, also called the impending departure of the Britain from the EU a “fantastic thing.”

May’s government has said it will trigger the formal Brexit negotiations by the end of March, after which the process of extricating Britain from the bloc is expected to take at least two years.