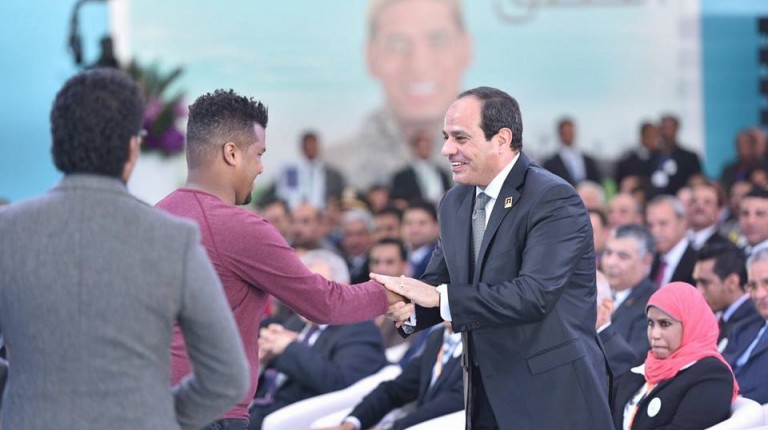 A number of Nubians, including heads of the Nubian Return Caravan, expressed their disappointment regarding the decision made during the second National Youth Conference held in Aswan, related to their issues.

The Nubians said that while some of the decisions made during the conference regarding Nubian lands were welcome, the decisions taken did not address their core demand regarding their right to return to their lands.

Mohamed Azmy, head of the General Nubian Union in Aswan, told Daily News Egypt in a phone interview on Sunday that he had expected the President Abdel Fattah Al-Sisi to choose Aswan to be the place to host the conference in order to take the opportunity to address the Nubian issue. He also said that he expected Al-Sisi to visit the disputed areas in order to discuss the situation with Nubian residents.

Commenting on the decisions made regarding Nubians during the conference, Azmy said that some of the decisions were in their interest, but that he was still waiting for a presidential decree allowing Nubians to resettle in disputed lands, as was previously promised and is in accordance to Article 236 of the Constitution.

During the conference, a decision was made to establish an authority to develop Upper Egypt governorates. Azmy said the government should focus primarily on resettling Nubians before forming this authority, adding that Nubians do not mind if the government tasked the authority to return Nubians.

During the closing session of the conference on Saturday, a Nubian woman from Nasr Al-Nuba called on the president to remember their demands, and provide opportunities to Nubian youth to work in the country’s factories.

In response to her, Al-Sisi said that the state is concerned about the Nubian issue, and assigned his assistant for national projects Ibrahim Mehleb to actively work on the issue. Al-Sisi added that he has signed all the suggestions and recommendations for Nubian development passed by Mehleb.

The president requested Mehleb to explain the efforts exerted for the Nubian issue following his statement.

Mehleb reviewed certain plans that the government started for Nubia which included development projects in the Nasr Nubia region and Karkar village, with the allocation of EGP 320m, to be concluded by the end of June 2018. He also spoke about the authority of developing Upper Egypt governorates, and plans for launching national projects to create integrated industrial zones.

Among all the decisions he mentioned, the main two demands of the Nubians were not on the list.

Shaaban expressed disappointment regarding the decision, saying that Mehleb’s committee working on the Nubian issue ignores the concerns expressed by the Nubians, explaining that the committee has been working without inviting Nubians to express their concerns.

He commented on statements that warned people from groups attempting to divide the country and the people in Nubia, saying that “this is not the way the issue will be solved.”

In his closing speech, the president warned against groups attempting to create disputes between the people and government. It was not clear if these groups included the caravan that recently arranged a number of protests to call for the rights of Nubians.

In late November, the caravan suspended a four-day protest following an agreement with the cabinet to give the government a chance to fulfil their demands.

On 19 November, a caravan of 25 microbuses carried dozens of Nubians from different governorates across the country and protested in villages at the heart of the dispute.

The caravan wants to discuss a law in parliament to resettle Nubians to their original lands and to return the land back to them. These lands were originally owned by Nubians but taken by the state during the construction of several mega projects in the 20th century.