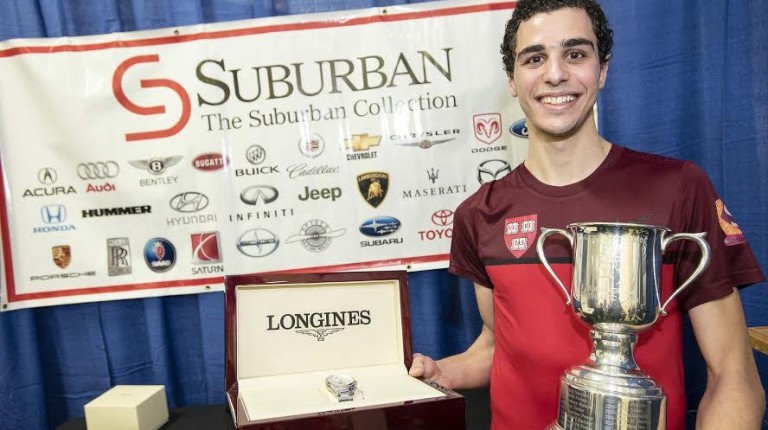 The quarterfinals of the 2017 Suburban Collection Motor City Open witnessed a match between the 2015 champion, Colombian Miguel Ángel Rodríguez, and the 2016 champion, Egypt’s Ali Farag.

After beating Rodríguez by 3-0 (11-9/11-5/11-3), Farag remained the only Pharaoh and the only champion ranked among the top 10 internationally, who made it to the semifinals.

According to Farag, “the first game was crucial for my confidence. I took that momentum into the second and stayed focused.”

Farag’s calm behaviour was a weapon against his rival—who had a tough 94-minute match against Egypt’s Zahed Mohamed the day before. Farag commented that the Colombian is “much more athletic than I am. I could never compete in that game, so I tried to control the pace and that made it difficult for him.”

Cuskelly used his speed as a weapon to play longer points and move the much larger Mosaad around.

In this regard, Cuskelly said: “I knew if I could just make it tough and move him around, he’d get tired eventually. I stayed strong and didn’t make many mistakes.”

After nine times participating in the Motor City Open, this is the first time for the Australian player to appear in the tournament semifinals.

Mosaad said on his Twitter account: “Regarding my match today in the quarterfinals, I have to say I am very disappointed with the quality of the referee.”

Another upset was Egypt’s Marwan El-Shorbagy who did not qualify to the semifinals, after losing to Peru’s Diego Elías by 3-2. Elías dropped the first game by 7-11 and then he recovered the second by the same score, 11-7. El-Shorbagy insisted in sealing his place at the semifinals by winning the third game by 4-11. However, the Peruvian player was the one who made it to the semifinals, winning the fourth and fifth games by 11-8 and 11-7, respectively.

Elías expressed that “I was feeling good, so I didn’t mind if it was a long match. I was enjoying it.”

Mosaad was not the only player who expressed his dissatisfaction with his match’s referee as Elías also commented: “We were both [Elías and El-Shorbagy] frustrated with the referee. It’s hard to get in a rhythm, but you have to concentrate and not lose your head.”

The semifinals are taking place on 29 January, with Elías matching up with Farag, and Cuskelly playing against South Africa’s Stephen Coppinger.