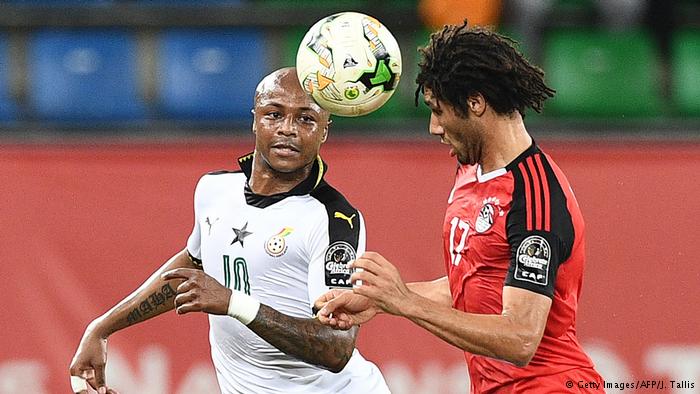 Ghana will face Cameroon in the Africa Cup of Nations semifinal on Thursday after goals from Ghana’s Ayew brothers saw off Congo in a bruising encounter. They will be joined by Egypt, who beat Morocco with a late winner.DR Congo 1-2 Ghana
(M’Poku 68′ – J. Ayew 63′, A. Ayew 78′ pen.)

Ghana are in the semifinals of the Africa Cup of Nations after beating Congo 2-1 Sunday.

Brothers Jordan and Andre Ayew were both on target, with the latter sealing victory from the spot to set up a last-four clash with Cameroon in Franceville on Thursday.

They are the sons of Ghana football legend Abedi ‘Pele’ Ayew, ranked among the greatest African footballers of all time.

Ghana are looking to end a run of 35 years without a Cup of Nations title.

The goal broke Moroccan hearts as they had dominated for long periods but couldn’t make the breakthrough in a game that lacked attacking quality.

But with extra time looming, Egypt’s moment came with three minutes of normal time to play. Mohamed Salah swung in a corner, which was flicked on and eventually turned in by Kahraba.

Egypt will face Burkina Faso in the last four Wednesday.