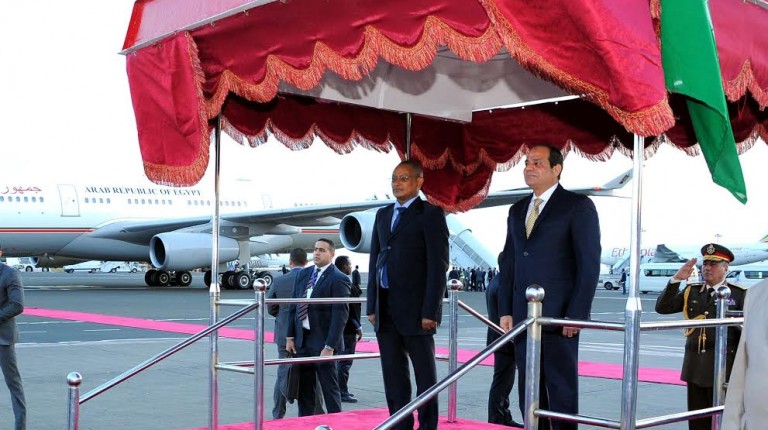 The leadership of the AU was also handed over during the summit from Chad to Guinea.

On the sidelines of the summit, Al-Sisi met Palestinian president Mahmoud Abbas to discuss the Palestinian-Israeli peace process.

Moreover, in the opening session of the summit, Al-Sisi signed the African agreement to counter corruption. According to the presidency’s statement, Al-Sisi’s signature indicated Egypt’s interest to achieve tangible progress in combating corruption.

Al-Sisi also met with a number of African leaders. His first meeting was with Kenyan president Uhuru Kenyatta, according to a statement issued by the presidency.

The official spokesperson of the presidency, Alaa Youssef, stated that both presidents referred to the historic and fraternal relations between Egypt and Kenya, adding that Al-Sisi asserted that Egypt is seeking cooperation and development with all African countries.

“President Abdel Fattah Al-Sisi stressed that Egypt’s foreign policy is built on non-interference in other countries’ affairs and cooperation to achieve development,” the statement read. “It is vital to foster economic and commercial exchange and cooperation between Egypt and Kenya.”

Moreover, Al-Sisi noted during the meeting that terrorism is considered one of the large challenges facing the African continent. The Kenyan president, according to the Egyptian statement, praised Egypt’s role in supporting the Kenyan people’s struggle to achieve independence in the 1960s.

Kenyatta also welcomed Al-Sisi’s upcoming visit to Kenya, which will focus on the implementation of cooperation agreements and the fostering of bilateral relations.

Meanwhile, Al-Sisi met with his Congolese counterpart Denis Sassou Nguesso on Sunday evening. Their meeting discussed bilateral relations between both countries and ways of fostering commercial and economic relations.

Their meeting also touched on efforts to settle the Libyan crisis in the meeting held recently by the Senior African Committee in Congo.

According to the presidency’s statement, the Congolese president praised Egypt’s role in reaching a political settlement for the Libyan crisis. Al-Sisi in turn asserted Egypt’s refusal to meddle in the internal affairs of the Libyan state.

The president called for a rapid resolution of the Libyan crisis in order to maintain the unity of the Libyan state by ending all disputes between different Libyan factions.