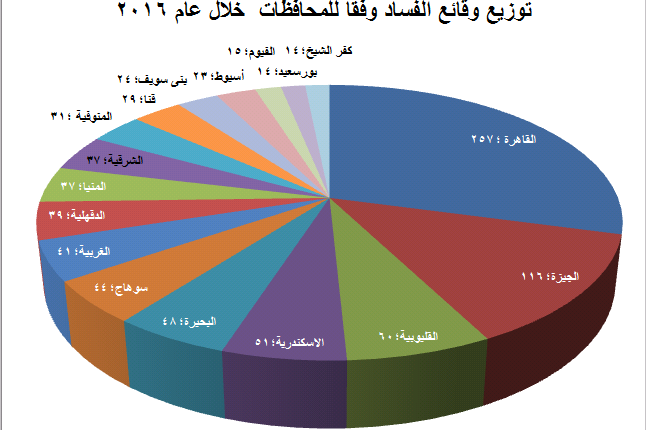 Partners for Transparency has recorded 968 incidents of corruption in Egypt in 2016.

According to their 2016 Corruption Logbook report, there was plenty of political discourse on combating corruption, but no legislative developments with concrete feasibility to combat corruption was forthcoming.

The report includes a presentation and analysis of legislative and procedural developments related to combating corruption, as well as incidents of corruption and their distribution by sector and geography.

The report pointed out that there was limited parliamentary activity and initiatives to create fact-finding committees, and law proposals have not reached the stage of serious discussion in specific committees or plenary sessions.

The report also noted that the Administrative Control Authority (ACA), which receives political support from the presidency and clear assignments to report on national projects before their opening, has succeeded in detecting a wide range of corruption and waste of public money in a number of bodies of the state.

The ACA has recently started proceedings against some officials at the Egyptian State Council on charges of bribery, as well as other cases against senior officials in the state.

Moreover, it added that the Administrative Prosecution has been significantly active in following up and investigating the huge number of issues within the state administration, and succeeded in returning large amounts of money illegally procured by some people.

The report also mentioned that there have been efforts made to develop a law to combat corruption, but such a law has not yet been implemented.

In contrast, the report said there was no noticeable role of the Central Agency for Accounting and its performance was very slow compared to the ACA and the Administrative Prosecution. It also said that the Central Auditing Organisation may have been negatively affected by the controversy surrounding its former director Hisham Geneina and the media clamour that followed.

At the bottom of the list come the ministries of electricity, higher education, and the social solidarity with 10 incidents each, followed closely by the Ministry of Culture with 9 incidents.

According to Transparency International, Egypt ranks 108th among 176 countries across the globe in the Corruption Perceptions Index, tying with Algeria, Ethiopia, the Ivory Coast, and Guyana.

PFT records 51 cases of corruption in state institutions in December

Are Egyptians victims of their laidback attitude and corruption?