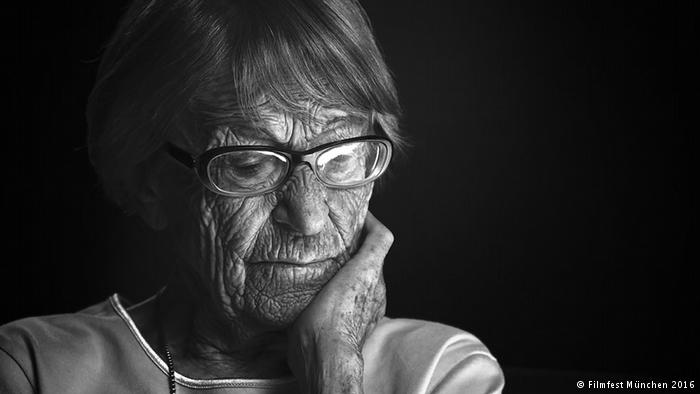 Many decades ago, Brunhilde Pomsel was Nazi Propaganda Minister Joseph Goebbels’ personal stenographer. She has passed away at age 106. She had recently agreed to be interviewed for the film “A German Life.””Ein deutsches Leben” (A German Life) is a German film in which four directors interview a memorable contemporary witness: Brunhilde Pomsel, who was the personal stenographer to Propaganda Minister Joseph Goebbels during the last three years of World War II.

The film is minimalist, in a contrasted black and white. The long interview stretches interspersed with short documentary sequences from the Nazi era, including propaganda films and Allied film material documenting the liberation of the concentration camps.

In July 2016, DW spoke to two of the directors, Christian Krönes und Florian Weigensamer. We are republishing this interview on the occasion of Pomsel’s death, which occured on January 27, 2017, as confirmed by filmmaker Krönes.

DW: Did Brunhilde Pomsel agree on the spot to make a film with you?

Christian Krönes: We met Mrs. Pomsel by chance, while researching a different story. We hadn’t expected to meet a living legend, but decided to try it out. She was 101 years old when we started filming. We knew we didn’t have much time left, but we really wanted to make this film.

How did things develop during pre-production, and while you were filming?

Krönes: It took a while for her to loosen up because she’d had some negative experiences with the media who only portrayed snippets of her history and her interviews. It took a while to convince her. But once she was ready, she was focused and disciplined throughout the entire making of the film, which must have been quite strenuous for her. It was the first time she had really opened up so extensively.

Krönes: I don’t think she’s pushed anything aside. She surely reflected on the past. She’s also very much a part of current events. She thinks about the present, she has thought about her life. Sure, there are repetitive speech patterns. And there are presumably a few details or stories she didn’t tell us about and that she has never told anyone about.

On the other hand, she did to a certain degree give witness to her life. When we showed her the film – she really liked it – she said something quite memorable: how important it is to have someone hold up a mirror at the end of one’s life in order to recognize all the mistakes one has made.

She vacillates between “refusing blame” and “confessing.” Doesn’t that also mirror the behavior of many people after the war?

Krönes: I think Mrs. Pomsel stands for millions of people, millions of blind followers who enabled that system. That’s probably the aspect that makes this historic film, this historic document, so interesting to the present. The film describes a functioning society that goes to pieces: world economic crisis, unemployment, the rise of the Nazis. Less than a decade later, it all leads to the biggest disaster in the history of mankind.

Today, we’re actually in a similar situation. That makes the film up to date and timeless. We’ve overcome an economic crisis and we’re being swamped by a wave of refugees. Far right parties across Europe are on the rise. The problematic situation is that this time, it’s not just one country that’s affected – like Germany back then -, but the entire European continent that’s drifting to the right.

Florian Weigensamer: There’s another scene, when we’re talking about Sophie Scholl and the resistance. Pomsel says: “These poor young people back then, executed because of a flyer…” As far as I’m concerned, both scenes show very well that what matters to Mrs. Pomsel are personal emotions, not “being above something” or the overall political picture – she never even saw that. She feels sorry for the two poor people who are executed because of a flyer: “If only they’d kept quiet, they’d still be alive today.”

That’s actually an absurd statement, but in her world, it’s logical, because for her, it’s only about these two people. And concerning Goebbels’ children, it’s all about her personal emotions: “The poor little children …” It’s never about the complete madness that surrounded her.

Let’s look at the film’s aesthetics. You work in black-and-white, there’s no commentary, and a few short documentaries have been inserted in the interviews – short Nazi propaganda films and footage by the Allies that shows the horror right after the liberation of the concentration camps….

Krönes: The film’s topic is timeless. We wanted to try to give this timeless topic timeless aesthetics. We decided on filming in black-and-white, and by placing Brunhilde Pomsel in a studio, we unleashed her from time and space. The black-and-white aesthetics give the film a timeless nature.

Weigensamer: You can’t add commentaries to material from the archives. It’s already propaganda material. Adding to it would be another layer of propaganda, done up as historic material. We really waned to leave it as it was, no music, no cuts, no involvement from our side. The result is a different kind of story from what you often see on TV.

There’s not only propaganda material, but also footage the Americans and the Russians shot after the liberation. There’s no commentary here, either. Why is that?

Weigensamer: Of course, to a certain degree it’s a counterpoint to Mrs. Pomsel’s view of the era: “Well, yes, the Jews… I didn’t notice at all…., the concentration camps…” So you have to show what was going on and that people certainly could have known if they had wanted to, they could have seen it. That’s the accusation, the only thing she is to blame for.

Looking the other way makes one guilty and being non-political is guilty as such. It’s not about unmasking her as a Nazi. Apparently, she wasn’t. She simply wasn’t interested – and that’s to blame.

A Story of Courage, Creativity and Survival