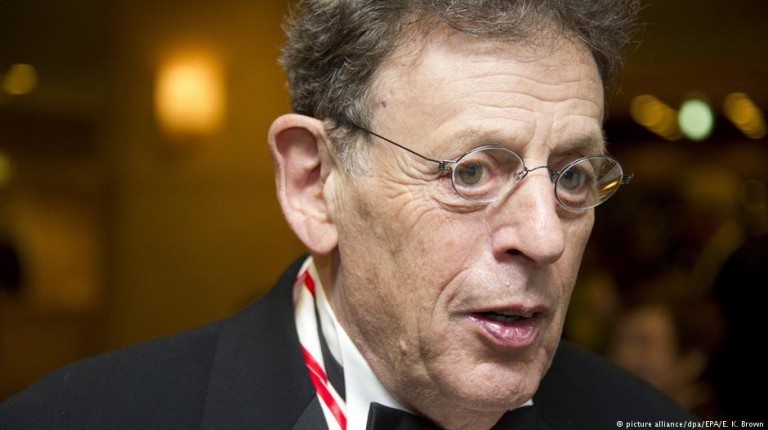 A founding father of minimal music and one of the most prolific living composers, Philip Glass also kept a side job as a taxi driver until his 40s. He now celebrates his 80th birthday with a series of concerts.His mother was a librarian. His father owned a record store and would spend the evenings listening to unsold recordings. The son listened along to Mozart, Schoenberg, Schubert and Charles Ives.

Philip Morris Glass was born on January 31, 1937 in Baltimore, into a family of Lithuanian Jewish immigrants. He played violin at an early age, later flute and piano. As an eight-year-old, he became a student at the Peabody Conservatory in Baltimore. By age 10 he was playing in local orchestras. After earning his Bachelor of Arts in Mathematics and Philosophy at the University of Chicago, he moved on to the Juilliard School in New York to study piano.

By 1964 he found himself in Paris, studying on a Fulbright scholarship under Nadia Boulanger – who, Glass later said, taught Mozart and Bach “with an iron rod.” The following year, he met another major influence, the sitar player and composer Ravi Shankar, who introduced him to the temporal and rhythmic characteristics of Asian music. He traveled India, took lessons on the tabla, became a Buddhist and later, an advocate of the Tibetan independence movement.

Returning to the US in 1967, Glass heard a performance of “Piano Phase,” composer Steve Reich’s groundbreaking work in minimal music – and was deeply impressed. With Reich and other ex-students, Glass founded an ensemble that would perform their music in art galleries in New York’s Soho district.

Following a dispute with Reich, he founded the Philip Glass Ensemble in 1970, with which the composer still performs on keyboards today. To keep himself afloat financially, Glass also founded a moving company and did odd jobs as a plumber and taxi driver. Publishing his own music and organizing his own concerts, he was finally able to live off his music at age 42 and let his taxi license expire.

The big international breakthrough came in 1976 with “Einstein on the Beach,” created in collaboration with the playwright Robert Wilson and the choreographer Lucinda Childs. Lacking a plot and lasting five hours without intermission, the opera was revolutionary. Twenty-five other operas were to follow, among them “Satyagraha,” “Akhnaten” and “The Voyage” – works now in the repertory of major opera companies worldwide.

With its conventional harmonies, the minimal music of Philip Glass, Steve Reich, John Adams and Terry Riley was the most radical departure imaginable from the then-prevailing aesthetic of twelve tone music. Not that Glass and cohorts rejected the latter, however. “How on earth can you reject Berio?” said Glass. “Those early works of Stockhausen are still beautiful. But there was just no point in attempting to do their music better than they did and so we started somewhere else.”

With its rhythmic vitality and mechanical feel, minimal music captured the feeling of the modern big city. Today Glass calls the term outdated, preferring to describe his approach as “music with repetitive structures.” That quality also earned him the unflattering description as “the composer of the broken needle,” and some consider the repetitions mind-numbing.

“There are some musicians that totally disregard the music of Philip Glass, thinking it’s very simple. And simpleminded,” said violinist David Harrington of the Kronos Quartet. “They should try to do it sometime. Philip’s music requires the utmost clarity of interpretation and sounds and intonation and rhythm of any music I can think of.”

Recently asked by “The Guardian” whether the culture wars between the atonalists and the minimalists have meanwhile abated, Glass said, “No no no no no. Those divisions never healed. Those people just died, and we carry on playing.”

As for the identifying quality of Philip Glass’ music, it’s less the harmonies and structures than it is the captivating, deeply melancholic or ecstatic motifs. It comes as no surprise that Glass names Franz Schubert as his favorite composer and Anton Bruckner as another major influence.

Glass has collaborated with various artists: musicians Paul Simon, Leonard Cohen and Patti Smith, choreographer Twyla Tharp and author Doris Lessing – but became known to a much wider audience through his work with filmmaker Godfrey Reggio and the 1982 cult film “Koyaanisqatsi.” Glass has also written scores for Woody Allen and Martin Scorsese and has earned three Oscar nominations.

The author of chamber music and piano pieces didn’t venture into his first work for full orchestra, a violin concerto, until age 50. That was followed by 13 other solo concertos and orchestral works of every genre – including 10 symphonies. Glass has said he was “forced” to do the latter by his friend and promoter, the conductor Dennis Russel Davies, who once told him, “I’m not going to let you be one of those opera composers who never write a symphony.” Doing so, Glass mentions Mahler, Beethoven and Shostakovich as major influences, recently explaining to his recording producer Richard Guerin, “I find my music is full of influences from other people. Rather than deny them I embrace them. People say that I don’t sound like anyone else. No, I say I sound like everybody else.”

Philip Glass’s Eleventh Symphony will premiere at Carnegie Hall on January 31, his 80th birthday. His many distinctions include the National Medal of Arts, awarded in September 2016. At the ceremony, former US President Barack Obama said, “Change isn’t easy. But over his career of symphonies and operas and film scores, Philip Glass has proven that change can be beautiful.”

In 2002, the composer founded the label Orange Mountain Music, which has released 60 LPs with his music. Apart from some film scores, Philip Glass owns the rights to all of his music and was long a skeptic of streaming services – but has recently made his catalogue available on Apple Music.

His ideas come to him in dreams, Philip Glass revealed to the German newsweekly “Die Zeit” in 2006, and he has to rush to write them down after awakening, then spends up to 12 hours a day composing. That contributes to making him one of the most prolific living composers. “Maybe I do too much,” he says, “I’m like a kid at a birthday party who wants to eat the whole cake alone.”

Currently working on a film score and planning his Twelfth Symphony, Philip Glass has advice for young composers: They should retain the rights to their music and if they can, perform it themselves, for “If we leave the decision of whether to play our music to others, nobody will hear it.” And getting a taxi driver’s license wouldn’t be a bad idea either.

9/11 is marked worldwide with reflection, prayers