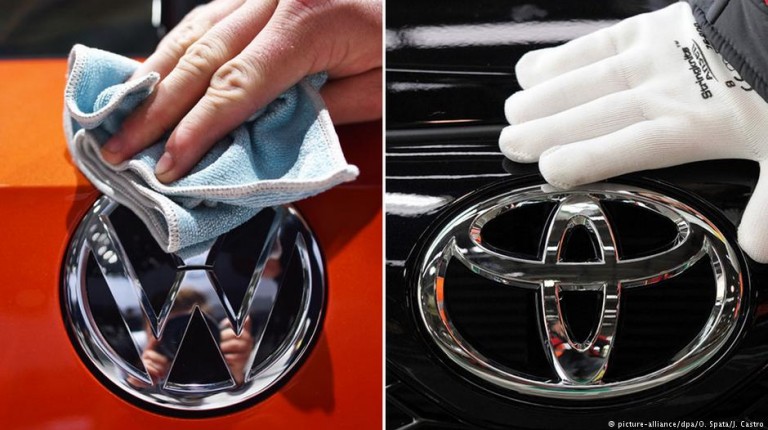 German carmaker Volkswagen (VW) has nudged Toyota from the top spot in global vehicles sales, after the Japanese auto giant has reported weak 2016 results, causing it to lose the crown for the first time in five years.Toyota announced on Monday that it had sold 10.175 million vehicles worldwide last year, which was a rise by 0.2 percent, but falling short of the 10.31 million cars sold by Germany’s VW group in 2016.

The German 12-brand carmaker moved back into the top spot despite being hit by a massive emissions cheating scandal that rocked its reputation. VW was plunged into its deepest-ever crisis after it emerged in September 2015 that it installed emissions-cheating software in 11 million of its diesel engines worldwide.

However, the crisis seemed to have little effect on the firm’s standing with drivers as it announced this month that annual sales rose 3.8 percent in 2016.

Seiji Sugiura, senior auto analyst at Tokai Tokyo Research Institute, said the results highlight the importance of the Chinese market and the popularity of VW’s widespread brand portfolio. “Volkswagen could stay at the top for the next few years,” he told the news agency Reuters. Hans Greimel, Asia editor for Automotive News also said that China made “the difference that matters.”

“Toyota has problems in China, whereas VW is very strong in China and is using it as en engine of growth. They might be neck-and-neck right now but maybe long term you have to be a big player in China, and Toyota is still playing some catch-up there,” he told the news agency AFP.

Moreover, Toyota was running out of steam in its key market, the US, he said, where it wasn’t able to tap the boom for sports utility vehicles (SUVs) “as much as its rival.”

US auto giant General Motors (GM) has yet to report its tally next week, but appears unlikely to overtake its two rivals. GM was the top-selling automaker for more than seven decades until Toyota surpassed it in 2008. In 2015, the Detroit, Michigan-based company reported sales of 9.8 million vehicles, coming in third place behind VW and Toyota.

Toyota’s vehicle sales in Japan grew in 2016, but the domestic market is relatively small compared to the US and China. Toyota sales fell on-year in the US, but they rose in China.

Toyota officials have repeatedly said they are not concerned with being the world’s best-selling carmaker and just want to make good cars.

“At Toyota, we are not focused on chasing volume. We believe that our sales volume is just the result of our focus on making ever-better cars and providing better customer experiences,” Toyota said in a statement. “We are grateful to every customer who has chosen a Toyota vehicle,” the statement added

Volkswagen was keen to dethrone Toyota but disavowed that goal after CEO Martin Winterkorn lost his job over the emissions scandal.