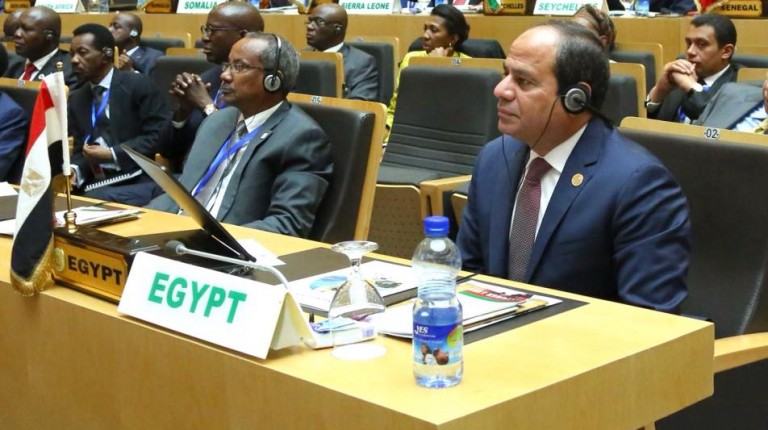 President Abdel Fattah Al-Sisi met with Ethiopian prime minister Hailemariam Desalegn on Monday in the Ethiopian capital of Addis Ababa on the sidelines of the 28th African Union Summit currently held there, according to a statement issued by the Egyptian presidency.

During the meeting, both leaders stressed the necessity of fostering bilateral relations between Ethiopia and Egypt and enhancing mutual confidence, the statement added.

“In a similar context, both leaders stressed the importance of expanding cooperation in different regional and bilateral relations, including political, security, and economic relations. They also agreed to suspend any stance that may undermine the fraternal and strategic nature of this relation,” the presidency statement read.

Both leaders noted that they are closely following up on the tripartite technical talks regarding the Grand Ethiopian Renaissance Dam (GERD). Moreover, they asserted their commitment to follow the spirit of cooperation in that matter, the presidency statement read.

The statement concluded that both leaders agreed on the necessity to stick to regular bilateral visits in different fields. Consequently, Desalegn accepted Al-Sisi’s invitation to visit Egypt soon.

In the same summit, Al-Sisi met with his Sudanese counterpart Omar Hassan Ahmad Al-Bashir on Tuesday on the sidelines of the aforementioned summit. Both of them discussed ways to enhance bilateral relations between both countries and how to tackle the challenges that are facing the Nile Basin countries.

During the second day of activities at the 28th African Union Summit, Al-Sisi headed the meeting of the Committee of African Heads of State and Government on climate change, during which he handed over its chairmanship to his Gabonese counterpart Ali Bongo Ondimba, according to the presidency statement.

On Monday, Al-Sisi participated in the 28th African Union Summit which began in the Ethiopian capital Addis Ababa. Al-Sisi first participated in a closed session of African leaders in which he asserted Egypt’s full support for African economic integration, a presidency statement said.

The leadership of the African Union was also handed over during the summit from Chad to Guinea.

On the sidelines of the summit’s first day, Al-Sisi met Palestinian president Mahmoud Abbas to discuss the Palestinian-Israeli peace process.

Moreover, in the opening session of the summit, Al-Sisi signed the African agreement to counter corruption. According to the presidency statement, Al-Sisi’s signature indicated Egypt’s interest in achieving tangible progress in combating corruption.