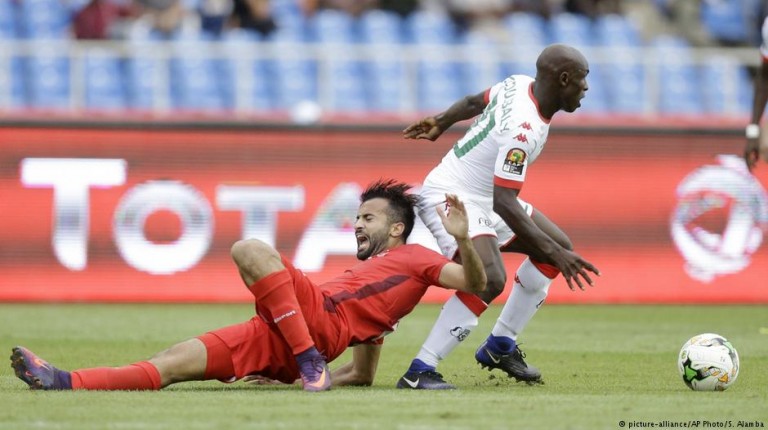 Burkina Faso may look like the surprise name in the last four of the African Nations Cup but they deserve their place with the big boys. Egypt though are record seven-times winners, writes Mark Meadows in Libreville.The Stallions of Burkina Faso have never reached a World Cup finals. They keep their powder dry for the African Nations Cup where on Wednesday (8 p.m. local time and CET, 1900 UTC) they will take on Egypt in the semifinals.

Burkina Faso, despite a lack of footballing infrastructure compared to the likes of Egypt and fellow semifinalists Ghana and Cameroon, finished fourth in this tournament in 1998 after losing to the Egyptians and to everyone’s surprise were runners-up in the 2013 edition.

This time they are aiming to go one better after being undefeated so far in the stifling heat at the 2017 championship here in Gabon.

“We are going to win against Egypt. I have been praying everyday and we will win,” Sore Hamado, who along with over 100 others has been sent to Gabon by the Burkina Faso government as part of an official supporters club, told DW.

They beat former champions Tunisia 2-0 in the last eight and go into the Egypt semi in the capital Libreville in confident mood, despite having played almost the whole tournament without one of their top players Jonathan Pitroipa.

The former Freiburg and Hamburg forward, who was named the best player of the 2013 edition, suffered a knee injury in the second group game and was ruled out of the tournament.

Prejuce Nakoulma came on for Pitroipa and immediately scored, while he also found the net against Tunisia.

Playing away with pride

Another former Bundesliga player, Aristide Bance once of Mainz and Augsburg, grabbed the other goal in the quarterfinal.

Bance underlines the togetherness the Burkina Faso squad boast. He was actually born in Ivory Coast and plays his club football there too now after traveling the world with an array of clubs, but he is hugely proud to play for Burkina Faso having moved there as a child.

Staying humble is the key to the entire project, according to Burkina Faso’s Portuguese coach Paulo Duarte.

“It is a semifinal, it is special for me. But it is a collective mission, not an individual mission,” he told a packed news conference with journalists from across the world.

“We have convinced the public that we have quality and can win matches. We still have humility in our own team and this gives us the willingness to go further and further.

“But we come up against a very strong opponent, the strongest in the history of this competition. The maturity and capacity to control a match is there among the Egypt side.”

Talking of maturity, there is no one in the Egypt side more experienced than goalkeeper Essam El Hadary.

He is the oldest player ever to play in the tournament at 44. The keeper thought he might miss his chance at breaking the record after being left on the bench for the opening group game here.

But rival keeper Ahmed El Shenawy collided with the post and injured himself in the 0-0 draw with Mali and El Hadary came on to great applause.

He has remained between the sticks through the rest of the tournament, pulling off a series of important saves as an otherwise youthful Egypt edged their way through the competition with three straight 1-0 wins.

“This new generation is still young and haven’t experienced winning an African Nations Cup, but this is my role,” said the keeper, who has won the title four times. “I tell them about our previous success and how we managed to do it.”

Meanwhile, Roma winger Mohamed Salah has arguably been the player of the tournament so far and Egypt will look to the former Chelsea player to make the difference again.

“They have the spirit to go on winning, I believe in them,” said Egypt’s much-traveled Argentine coach Hector Cuper. “I have never seen such modest players who love their country so much.”

But Burkina Faso fans are expected to vastly outnumber the traveling Egypt support on Wednesday at the 40,000 capacity Stade de l’Amitie, whose modernity contrasts markedly with the close-by poverty of the Gabonese capital.

The weight of history points to record seven-times champions Egypt making Sunday’s final, with Ghana and Cameroon meeting in the second semi on Thursday.

But the weight of expectation from Burkina Faso fans is so immense that nothing is certain.