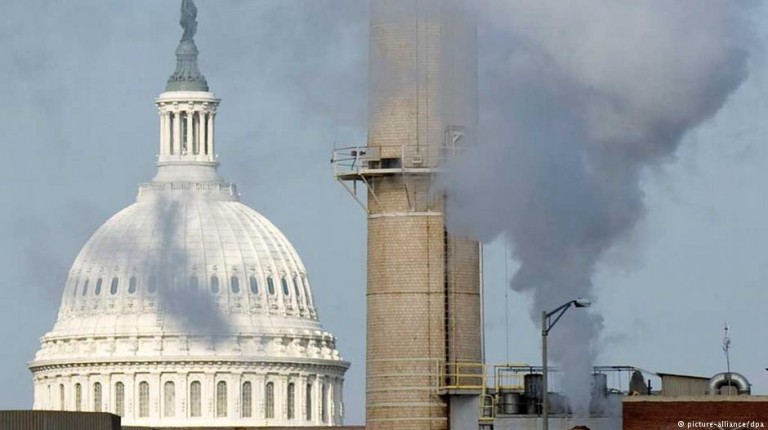 Ahead of the confirmation hearing of climate skeptic Scott Pruitt, President Trump’s nominee to head the EPA, former aide Myron Ebell says it’s only a matter of time until the US leaves the climate agreement.The former head of President Donald Trump’s transition team at the Environmental Protection Agency (EPA) has said it is only a matter of time before the president pulls America out of the Paris climate agreement, and that an executive order on the issue could come within days.

“I expect Donald Trump to be very assiduous in keeping his promises, despite all of the flack he is going to get from his opponents,” he told the media at a briefing in London on Monday. He was speaking at an event organized by The Global Warming Policy Foundation (GWPF), the main group advocating climate change skepticism in the United Kingdom.

Speaking in London, Ebell also called the environmental movement “the greatest threat to freedom and prosperity in the modern world.”

Ebell, a long-standing climate change denier, said the United States would “clearly change its course on climate policy” under the new administration.

‘Multiple ways’ to pull out

Ebell worked for Trump until his inauguration on January 20. He sees himself as an “enemy of climate change alarmism,” and does not accept that carbon dioxide is affecting the Earth’s climate.

He told the gathering the president could pull the US out of the Paris Agreement at short notice: “He could do it by executive order tomorrow, or he could wait and do it as part of a larger package. There are multiple ways and I have no idea of the timing,” Ebell said.

Critics are concerned because Pruitt also denies climate change, and has engaged in major lawsuits against anti-pollution regulations governed by the EPA. This includes the Clean Power Plan, which was the key element of the Obama administration’s emissions reduction program.

Rex Tillerson, a former ExxonMobil chief executive, nominated by Trump as Secretary of State, indicated during his recent Senate hearing that the US might remain in global climate negotiations, which are being coordinated by the United Nations.

In response to a question about the Paris Agreement, he said: “I think it’s 190 countries have signed on. We’re better served by being at that table than by leaving that table.”

Yet apart from indicating it might be better to stay in the negotiations, Tillerson played down climate change considerably.

Christina Deconcini, Director of Government Affairs at the World Resources Institute, told DW: “He misstated and understated the scientific evidence around climate change and what is happening.”

ExxonMobil is accused of having covered up evidence of climate change in its own research for decades.

From rhetoric to action

Ebell told the press in London he assumed the president would overrule Tillerson on any dispute over climate policy. However, President Trump’s recent assertion that he would give his secretary of defense, James Mattis, the final say in a dispute over policy on torture could indicate that he may allow his cabinet to make decisions that are not necessarily in line with his own rhetoric.

Although he appears to have moved slightly away from his campaign stance by admitting there is “some connectivity” between human activity and climate change, he has also stated that he will not allow environmental or climate regulations to make US companies uncompetitive.

“There are reasons to think some of the rhetoric might be toned down and different decisions made along the road,” WRI’s Deconcini told DW.

She says Trump may realize that it is “in America’s best interests” to remain in the Paris Agreement after all.

Even if the new administration does roll back the Clean Power Plan, Deconcini saysother developments could mean the US could still achieve its climate targets of reducing 2005 emission levels 26 to 28 percent by 2025.

“It’s quite conceivable that under a new administration, the states would really up their game,” Deconcini said.

She also pointed out the tremendous speed with which renewable energy is advancing, and how fast the price of it is coming down.

“So it’s possible through market forces, and good state actions and businesses – who are not going to stop moving in low-carbon directions – that we will be able to meet those targets.”

Deconcini said she hoped the President’s background as a businessman would convince him that if the US is to be competitive, it must not “cede the ground on the clean energy race to other countries.”

She told DW opinion polls showed people in the US are extremely interested in moving to a low-carbon economy:

“Many polls demonstrate it’s not the top concern of people in the US; but people generally want policymakers to move in that direction.”

The WRI believes as climate impacts become increasingly evident and costly, the pressure to combat climate change will increase.

Deconcini cites concern over the likely impact of sea level rise in Florida as one example.

“I think that will increase the urgency over time, and the amount that elected representatives hear from their constituents about wanting to move towards reducing greenhouse gas emissions.”

Myron Ebell, however, remains convinced that President Trump “thinks global warming is not a crisis and does not require drastic and immediate reductions in greenhouse gas emissions.”

At one point considered to be a pick for heading the EPA, Ebell has now returned to his position as Director of Global Warming and International Environmental Policy at the Enterprise Institute, an advocacy group based in Washington, D.C.