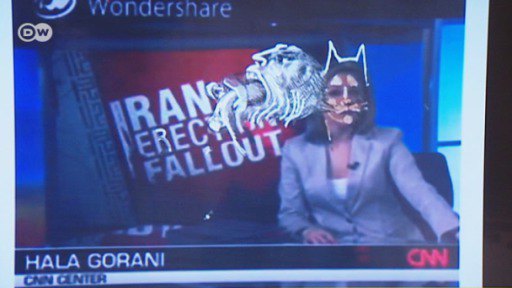 While Iranian passport-holders are temporarily banned from entering the US, top Iranian artists, authors and musicians take the limelight in Berlin. The Goethe-Institut presents a three-month series, “Iranian Modernity.”With numerous exhibitions and publications raising the profile of Iranian art in recent years, and auctioneers welcoming items from the central Asian country in their catalogues, works from the central Asia country have grown in popularity. The Goethe-Institut in Berlin is responding to this trend with a three-month cultural program entitled “Iranian Modernity,” which seeks to offer a more complete picture of the country.

Berlin-based Iranian actress and cultural expert Narges Hashempour told DW that part of reason for this renaissance of Iranian culture was on account of Iranian artists finding themselves in an “in-between” state of mind, whether they had moved abroad or continued to live in Iran.

“These constant changes in Iranian society provide an impulse for artists. This is what makes Iranian art so dynamic: Everyone is searching for alternatives,” Hashempour said. She also added that US President Donald Trump was choking these dynamics with his policies by sealing his country off from the Muslim world.

With US President Donald Trump’s recent travel ban for holders of passports from Iran and six other Muslim-majority countries, the timing of the Goethe-Institut’s event couldn’t have been more apt. However, political awkwardness has not just arisen between Iran and the US lately, but also between Iran and Germany.

After the nuclear deal framework signed between Iran and the West in 2015, Germany tried to improve cultural exchanges between the two countries.

A major exhibition of international art from Tehran’s Museum for Contemporary Arts (TMoCA) was scheduled to open its doors at Berlin’s National Gallery in December 2016. The show was largely based on the collection acquired by Farah Diba Pahlavi, the wife of the late shah Reza Pahlavi.

But the mammoth event had to be canceled after Tehran failed to produce export permits for the artworks. Which events exactly led to the calling off of the exhibition remains unclear.

Germany-based Iranian artist Parastou Forouhar had criticized the project early on due to its lack of transparency. “Germany and Iran wanted to create a beautiful art and culture backdrop. But the deal was too controversial to achieve the desired effect,” she said.

Works by Iranian artists on show in Berlin

All this makes the current program by the Goethe-Institut all the more relevant. Through April, organizers Nikolai Blaumer and Florian Bigge are presenting works by 27 Iranian artists from Iran and another 15 who live in exile, including musicians, filmmakers and literary figures.

“The long isolation of their country has done a lot of damage in Iranian society,” organizer Florian Bigge told DW. “Many Iranian artists are hungry for dialogue with the rest of the world.”

The event coordinators write that Iran’s cultural life is colorful and diverse and much more complex than the age-old conflicts between Islam and secularism, reactionary and revolutionary thinking, and regressive and progressive forces.

To examine the definition of modernity, the Goethe-Institut has invited Iranian philosophers Mesyam Sefidhkosh and Hossein Mesbahian for a panel discussion.

Several events during the three-month program look at Iranian writers and their approach to their work. Authors like Nahid Tabatabai, Belgheis Soleimani and Nasim Marashi will contemplate the issue of remaining loyal to their cultural roots while writing as part of the Diaspora.

Another writer featured during the talks is Mahmoud Dowlatabadi, whose works are forbidden in Iran. Still, he is considered one of the most prominent representatives of contemporary Iranian literature. Authors Shahriar Mandanipur, who lives in the US, and Amir Hassan Cheheltan, who lives in Iran, are scheduled to discuss Iranian literature created both within the country and abroad.

In addition, German-born Shida Bazyar will introduce her first novel, “Nachts ist es leise in Teheran” (It’s Quiet at Night in Tehran), which travels from the present to the eve of the Islamic Revolution two generations ago.

A number of Iranian musicians will also share their work in the events series, including Ata “Sote” Ebtekar in collaboration with audiovisual composer Tarik Barri and instrumentalists Arash Bolouri and Behrouz Pashaei. Their amalgamation of electronic sounds with traditional Persian instruments create, as they call it, a veritable “Persian techno apocalypse.”

After visa revoked, student arrested for Trump threats to return to Egypt within 10 days