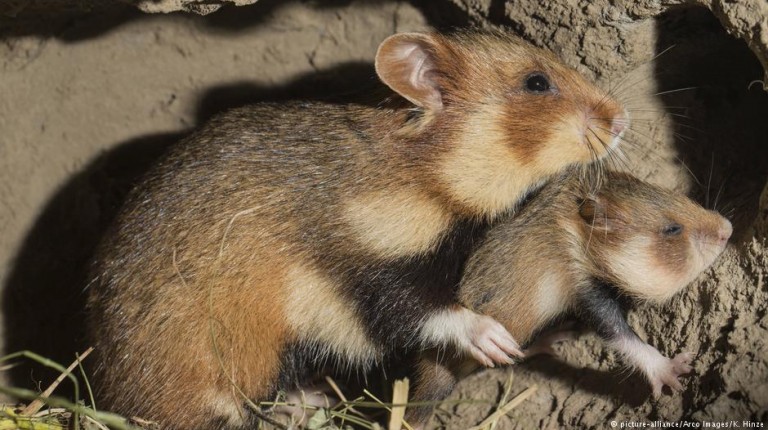 An all-maize diet is turning wild hamsters in northeastern France’s maize fields into deranged cannibals that devour their own offspring. The same crazy-making nutritional deficiency has affected humans in the past.A balanced diet with all the right nutrients isn’t important only for humans. It’s important for wild animals, too. Its absence can lead to rather horrifying consequences – as the example of wild hamsters living in western European farmlands demonstrates.

The numbers of wild European hamsters (Cricetus cricetus) have declined by more than 99 percent over recent decades in Belgium, the Netherlands and the adjacent German federal state of North Rhine-Westphalia during recent decades. It was already known that ploughing of fields, which destroys their underground burrows, was part of the reason, and pesticide exposure probably another.

But a group of researchers led by Mathilde Tissier, a biologist at the University of Strasbourg in northeastern France, wondered if a nutrional imbalance might be part of the reason for the steep decline too.

Life in the maize fields

Tissier and her colleagues knew that there’s little other than maize available for wild hamsters to eat in the industrial maize-field monocultures that have replaced natural ecosystems over huge swathes of Europe, to produce raw materials for biofuels as well as fodder for pigs or humans.

Maize – usually called corn in the United States and Canada – is a grain plant first domesticated by indigenous peoples in Mexico about 10,000 years ago. It is descended from a genus of plants in the grass family called Zea by scientists, or “teosinte” in native Mesoamerican languages.

The Strasbourg researchers knew that a nutritional deficiency caused by a diet too dominated by maize had caused health problems in human populations in the past. From 1735 to 1940, maize-based diets led to the death of hundreds of thousands of people from pellagra, a complex disease caused by deficiencies of either tryptophan or vitamin B3, or both.

Vitamin B3 is also known as niacin, and if you look closely at the list of ingredients on a box of processed cereals, you’re likely to find niacin has been added. That’s a direct consequence of the pellagra problems of the past.

Pellagra is associated in the medical literature with the “three Ds”: Diarrhea, dermatitis, and dementia.

Was the same phenomenon – pellagra, and its raft of symptoms – affecting wild European hamsters whose diet was too maize-dominated? Tissier decided to find out – by feeding groups of hamsters different diets in the laboratory.

A first set of lab experiments with wild specimens compared wheat-based to maize-based diets, each with side dishes of clover or worms.

There was virtually no difference in the number of pups born, or the basic nutritional value of the different menus. But when it came to survival rates, the difference was dramatic.

About four-fifths of the pups born of mothers feasting on wheat-and-clover or wheat-and-worms diets were successfully weaned. In stark contrast, only five percent of the baby hamsters whose mothers ate maize instead of wheat lived to the end of the weaning period.

What was most disturbing is how some of them died: Their mothers – or, in some cases, their siblings – ate them.

“Females stored their pups with their hoards of maize before eating them,” the scientists reported. “Pups were still alive at that time.”

The maize-fed mothers showed other signs of abnormality: they ran in circles, “climbing and pounding their feeders,” when scientists entered the room.

They also had swollen and dark tongues, reminiscent of ‘black-tongue syndrome’ in dogs whose diets are deficient in niacin. The maize-fed hamsters had blood so thick it was difficult to draw for samples, and a variety of skin or hair abnormalities.

After the first round of experiments, it seemed likely to Tissier that the hamsters were indeed experiencing their species’ version of pellagra.

“Improperly cooked maize-based diets have been associated with higher rates of homicide, suicide and cannibalism in humans,” the researchers noted in their final report, drawing a clear parallel between cannabalistic hamsters and the types of craziness observed in 19th century humans afflicted with pellagra.

So they re-ran the same set of dietary experiments with new groups of hamsters, with one difference: in the second round of experiments, they added a group of hamsters whose maize-based diets had been supplemented with added niacin (vitamin B3).

Sure enough, the niacin-enriched diet was enough to eliminate the horrific symptoms associated with the maize-based diet. None of the niacin-supplemented mothers ate their young.

The dire consequences of a vitamin B3-deficient maize diet, the scientists concluded, stemmed from a change in the hamsters’ nervous system that induced dementia-like behaviours.

If humans, dogs, and hamsters are all at risk of forms of pellagra if they’re restricted to excessively maize-based diets, the scientists suggested, other species of wild animals beyond European hamsters – for example, other wild rodents – may also be at risk of pellagra-like diseases and population declines in territories dominated by maize monocultures.

“Knowing that [wild animal] species [that live in modern farmlands] already face many threats, and that most of them are in danger of extinction, it is urgent to restore a diverse range of plants in agriculture schemes,” the researchers wrote in conclusion.

Gerard Baumgart, President of the Research Centre for Environmental Protection in Alsace, is an expert on the European hamster. Speaking to AFP on Friday, he agreed with the Strasbourg researchers’ recommendations. “Our hamster habitat is collapsing,” he said. “Monoculture in agriculture is really bad for biodiversity… Now we need to take concrete action.”

Including material from AFP.