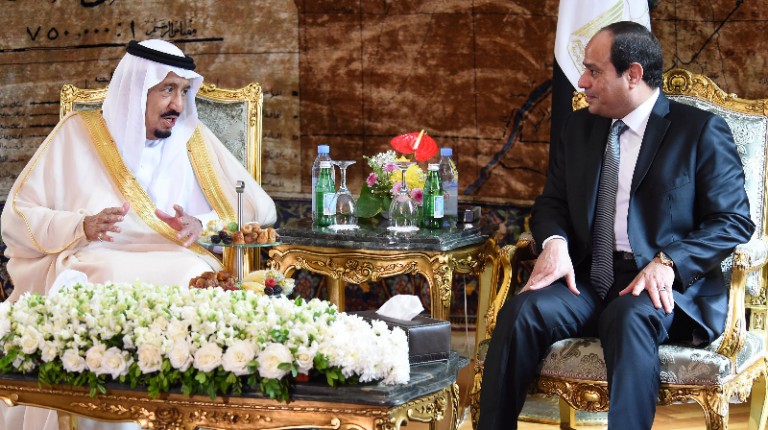 In the 1970s, the alliance between Egypt and Saudi Arabia was formed as a result to the countries’ mutual interests and threats. The ties between the two countries were stronger than ever, especially after Egypt had led the Arab participation in the international coalition against former Iraqi president Saddam Hussein in the early 1990s, after the Kuwait invasion.

However, the Egyptian-Saudi relationship has been significantly strained. Over the last few months, the rift between the two counties started to show, following Egypt’s vote on the Russian-backed draft resolution in the United Nations security council in October, in favour of a Russian resolution regarding a ceasefire in Syria excluding Aleppo. Saudi Arabia interpreted the move as a betrayal, as Saudi envoy to the UN Abdullah Al-Muallami called Egypt’s stance “painful”. The Egyptian vote was followed by Saudi Arabia’s Aramco deciding to halt the five-year agreement to import 700,000 tonnes of petroleum products a month to Egypt, at a time that oil imports were very critical for the Egyptian economy.

Egyptian-Saudi relations have always been characterised by some invisible tensions and sensitivities. The differences in their views and strategic position in the MENA region came to light, especially through their stances regarding Syria, and the Egypt’s refusal to be dragged into the conflict with Yemen.

Moreover, Egyptian government officials do not see Iran as an existential threat and are reluctant to enter the Sunni-Shi’a struggle. Egyptian Foreign Minister Sameh Shoukry said after signing of the Joint Comprehensive Plan of Action (JCPOA), known commonly as the Iran deal, that Egypt’s relations with Iran “are unrelated to the attitude of the Gulf states towards it.” Instead, the Egyptian state has prioritised countering its most direct political opponents, the Muslim Brotherhood, and other Sunni Islamist groups.

Additionally, the mutual sensitivities burst forth in April 2016, when Al-Sisi had reached an agreement to cede ownership of the strategically located Red Sea islands Tiran and Sanafir to Saudi Arabia, in a move that was received with public outcry. Judicial intervention scuttled the move—to the Saudis’ extreme annoyance. No less annoying was Egypt’s refusal to participate in the Saudi-led military operations in Yemen. Following the Egyptian resistance to militarily commit to the Saudi coalition in Yemen, Riyadh started its financial pressure. Al-Sisi had gotten angry and defiant. Saudi Arabia, which had not made good on its financial promises from 2014-2015, cut off its oil supplies and other aid to Egypt.

In November, Egypt and Iraq signed a memorandum of understanding (MoU) for Egypt to receive 1m barrels of Basra light oil each month. The MoU with Iraq, which has grown closer to Iran in recent years, plus one with Azerbaijan, are indicative of Cairo’s quest to find new sellers of oil and gas outside of the GCC, as Egypt’s energy production has fallen and its national consumption has increased.

Habib Al-Sadr, the Iraqi ambassador to Egypt, has called Egypt “the backbone of the Arab world.” He said the countries share similar pressures and risks from armed groups. Furthermore, Iraqi minister of foreign affairs Ibrahim Al-Jaafari recently said that “Egypt is the Arabs’ greatest,” referring to the country’s people, history, and culture.

Russia’s closer relationship with Egypt was the cornerstone of the latter’s shift in stance. Egyptian-Russian ties started to grow stronger in recent years. Consequently in September 2014, Egypt and Russia signed a $3.5bn weapons deal. In May 2016, Egypt announced plans to build a nuclear power plant to be financed with a $25bn loan from Russia. Moreover in October, Egypt hosted a joint military exercise with Russia.

Furthermore, the Egyptian and Russian stances in Syria and Libya are almost similar. Al-Sisi has previously announced his support for the Syrian and Libyan armies. This is considered a stab in the back from Riyadh’s perspective, since it has armed forces opposing Al-Assad and provided them with financial and diplomatic support.

The Yemeni crisis played a major role in the deterioration in Egyptian-Saudi relations. Although Cairo joined the Saudi-led coalition’s campaign (“Operation Decisive Storm”) in March 2016, Egypt has been reluctant to be dragged into the Yemini swamp, since Egypt’s history of fighting in Yemen during the 1960s and accruing massive losses is certainly a major factor explaining Al-Sisi’s reluctance to make a substantial contribution to the anti-Houthi military campaign. This comes in addition to the fact that Saudi Arabia’s warming up to the Muslim Brotherhood branches in both Egypt and Yemen to secure Sunni support for the kingdom’s war in Yemen has created tension in the Cairo-Riyadh relationship.

In December, a high-level Saudi delegation visited the Grand Ethiopian Renaissance Dam, which stirred anger in Cairo, and worsened the already strained Egyptian-Saudi status. The move was viewed as part of Saudi’s pressure on Egypt in regard to the maritime demarcation deal of the two Red Sea islands which was annulled and considered void by an Egyptian court ruling. During the visit, the prime minister of Ethiopia had called for Saudi financial support to the dam.

However, Saudi Arabia has to learn that it cannot buy influence using its petro-dollars. Egyptian officials are leaning toward the Moscow-Baghdad axis, and Al-Sisi has delivered a message to Saudi Arabia that Cairo’s alliance with Riyadh is not irreplaceable and that Egypt has other options, should the Saudis decide to diminish their support for his country.

Since the ousting of former president Mohamed Morsi on 3 July 2013, Saudi Arabia and other GCC members have provided the Egyptian government with strong support, in both direct aid and loans. Yet, Egypt’s refusal to follow the kingdom’s policy in Syria and Yemen—in addition to the closer ties between Egypt, Russia, and Iraq—have stirred anger in Riyadh.

The Iraqi-Egyptian rapprochement will carry numerous benefits for Egypt, as Iraq can provide Egypt with all its oil needs at a lower cost than Saudi Arabia. Additionally, an alliance between the two countries will pull Iraq away from the GCC, specifically from Saudi Arabia, which has the final say in matters of the Gulf.
The Iraqi ambassador to Egypt had announced earlier that after the completion of the ongoing Iraqi army and security forces operations against the Islamic State (IS) and after the expulsion of IS fighters, the affected cities will need total reconstruction so that people can be relocated there once again. He added that the Iraqi government welcomes Egyptian companies and workers to lead the reconstruction process of such cities.

Moreover, he emphasised the importance of the Egyptian expertise in the rehabilitation of factories and establishments, as well as supplying logistical medical support to Iraqi hospitals.

The Iraqi government’s decision for closer ties with Egypt is praised by various politicians and parliamentarians. Deputies from the National Iraqi Alliance are calling on the Iraqi government to export crude oil to Egypt with facilitated payments. Fatima Al-Zarkani, National Iraqi Alliance parliament member, has announced that Egypt and Iraq will form an alliance to fight terrorism and prevent extremism in the region.

Moreover, the Iraqi foreign minister has stressed that the relations between Iraq and Egypt are strategic on all levels—economic, security, and political—adding that rapprochement between the two countries could turn into an alliance or cooperation to face terrorist risks and economic crises.

On the other hand, official spokesperson of the Egyptian presidency Alaa Youssef said that during the December meeting with Al-Sisi, the Iraqi foreign minister called for Egypt’s participation in fighting terrorism.

Basic system for agricultural banks merger to be set up in two months: EAB head