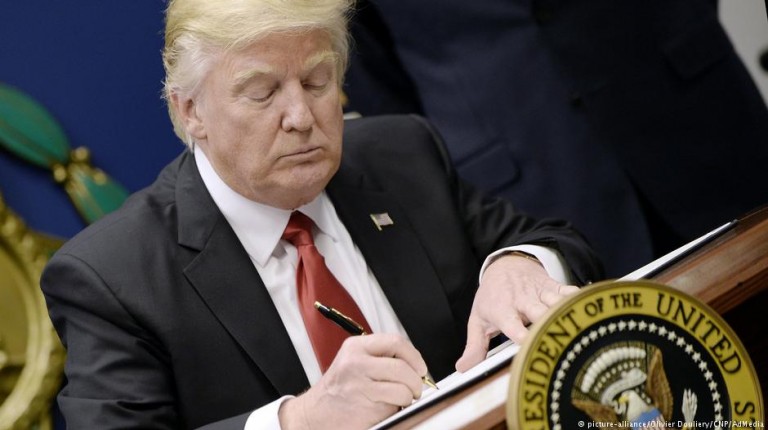 Just a week into his presidency, Donald Trump is already undermining inclusive decision-making on environmental issues.Before he was inaugurated, fears swirled that President Donald Trump would make good on his environmentally unfriendly campaign rhetoric. After just a week in office, those fears may already be being realized. Experts from the Washington-based global research organization the World Resources Institute (WRI) have warned that environmental democracy could be under threat.

According to the WRI, one of the first troubling signs on the horizon for environmental democracy – or inclusive decision-making on environmental issues – is the Trump administrations media blackout on the Environmental Protection Agency (EPA).

Just days into Trump’s presidency, emails were sent to EPA staff barring them from speaking to reporters, posting updates on social media or sending press releases. All incoming media requests would be screened by the administration from now on, according to the emails.

Other agencies, including the US Department of Agriculture and the National Parks Service, were issued similar gagging orders.

Political appointees are also exerting more oversight over the EPA’s scientific communications. Scientists at the agency were told their scientific findings must be reviewed on a “case by case basis” – at least for now – before they can be released to the public. This includes routine pollution-monitoring data.

The WRI blog says preventing citizens from having access to accurate, timely information that has not been editorialized or modified will “obstruct an integral component of democratic policymaking.”

“Citizens can neither understand nor participate in environmental decision-making without having access to objective, scientific information and data,” the WRI says, adding: “As a public institution, the EPA is legally required to provide access to critical environmental information, such as air and water pollution monitoring reports.”

The blog notes this would be the first time the agency’s scientific data – including figures on climate change – required review by officials before publication.

Legally, Trump cannot abolish the EPA, something he pledged to do during his election campaign. But he could still do much to wreck it over the next four years by slashing its staff and budget.

Elizabeth Moses, environmental democracy specialist at the WRI and one of the blog post’s authors, told DW, “People need to have objective access about environmental issues and the EPA plays an incredibly essential role in helping to educate people, businesses and a variety of other shareholders in terms of what those environmental facts are, so they can participate in decision-making.

“Anything that prevents people from getting that objective information is going to jeopardize their ability to make well-informed decisions.”

The president’s executive order to revive the Keystone XL and Dakota Access pipelines, without consulting with the State Department and bypassing further public consultations, also looms as a major threat.

“Public participation is the bedrock of environmental democracy; yet the new administration’s plans may undercut this pillar of good governance,” wrote the WRI.

Miranda Schreurs, professor of Environment and Climate Policy at the Technical University of Munich, told DW the growing encroachment on environmental democracy was “shocking” and criticized the administration’s apparent bid to censor climate science.

“Regardless of which administration has been in power in the past, be it democrat or republican, the US has been a leader on environment science, and any action to damage this would risk climate science and the reputation of the USA as a leader on these questions,” Schreurs told DW.

“The real threat is that science is being discredited for what it is. It suggests that science needs to be vetted by political appointees and as soon as you do that, it appears politically motivated and that threatens a fundamental pillar of our society: the concept of objective science.”

She added: “It does strike at the heart of democracy, because one of the key pillars of any democracy is to have access to information for its citizens.”

Given the EPA’s legal requirement to provide environmental information, Schreurs said any attempts by the Trump administration to stymie this could lead to legal action.

“The federal budget is being used to collate this information and it’s a transparency requirement that you know what’s happening with the information. So yes, there could easily be grounds for lawsuits.”