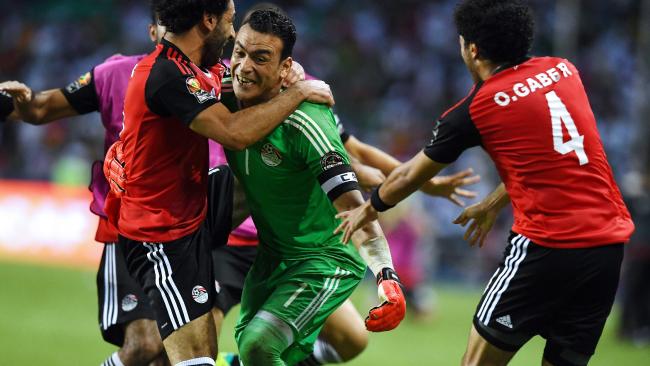 Egypt qualified to the final match of the 2017 Africa Cup of Nations (Afcon) on Wednesday, after defeating Burkina Faso 4-3 in the penalty shootout of the tournament’s first semifinal match.

The first half of the match did not witness any goals although Egypt had two real good opportunities. The first was when Egypt’s Mahmoud Hassan, known as “Trézéguet”, tried to score a goal that did not go through, and the second one was when Burkina Faso’s goalkeeper, Herve Koffi, blocked an attempt by Egypt’s Mahmoud Kahraba.

Burkina Faso’s team kicked the ball 10 times against Egypt’s goal, but to no avail; thus, the result of the first half remained 0-0.

In the second half, Kahraba got a yellow card. This is the second time Kahraba gets a warning, as he got one previously in the quarterfinal’s match between Egypt and Morocco; thus, he will not be among the Egyptian team in the final.

In minute 66, Egypt’s Mohamed Salah lifted the spirits of the Egyptian audience by scoring a goal. Unfortunately, this joy did not last long, as in minute 72, Burkina Faso’s Aristide Bancé scored a goal, bringing the match’s score to 1-1.

Seeing the situation as it was, Argentinean Héctor Cúper, coach of the Egyptian team, made changes in minute 74 by replacing Kahraba with Amr Warda. Eleven minutes later, in minute 85, Trézéguet was replaced by Ramadan Sobhy.

After the second half, the result remained 1-1, so the match was extended for another two halves of 15 minutes each.

During the second 15 minutes, Egypt’s Ahmed Elmohamady was replaced by Omar Gaber.

The result remained 1-1, leading to a penalty shootout.

The Egyptian team scored four penalties thanks to Sobhy, Ahmed Hegazy, Salah, and Warda. On the other hand, Burkina Faso’s team scored three penalties, so the match’s result after penalties was 4-3 in Egypt’s favour.

Egypt’s goal keeper Essam El-Hadary has proven himself to be Egypt’s hero, as he prevented the opponent from scoring goals in several occasions. The tensest moment was when Burkina Faso’s Bertrand Traore tried to score Burkina Faso’s last penalty shot, and also the match’s last penalty shot. However, El-Hadary managed to block the shot, securing Egypt’s place in the final.

The final match will take place on 5 February. Egypt will meet the winner of the other semifinal match, which is taking place on 2 February between Cameroon and Ghana.