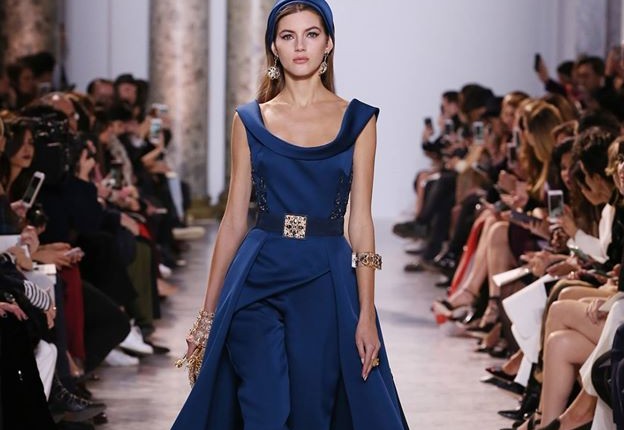 Last week, a single photo of a sailboat embroidered amid blue beads on a luxurious organza fabric broke the internet. The elaborate embroidery became the number one highlight from the current season of Couture Week in Paris after the designer behind it shared further details with none other than American Vogue.

Elie Saab, the pioneering Lebanese designer, won the Spring/Summer season of 2017 with a retro-fueled collection inspired by the Egyptian cinema’s golden age. The designer introduced a nostalgic collection influenced by the personal style of many late local starlets, including Souad Hosny and Faten Hamama.

In his post-show interviews, Saab stated that during the 1950s, the Egyptian cinema was capable of leading societal phenomena and causes. According to the designer, people were able to express themselves and their talents through various forms of arts including cinema and music; something that made Egypt a cultural hub and allowed Arabic culture to flourish and reach foreign countries.

The collection maintained the designer’s dreamy aesthetic with flowing silhouettes and mid-length dresses. As for the colour pallet, Saab favoured a number of romantic shades that resembled the era’s most popular movies. From powder blue to light pink, the gowns would have been a red-carpet choice for various beloved starlets.

With that said, the show’s main innovation was the hybrid pants/dress gown, which combined the new millennium’s modernity with the 1950s glamour. Meanwhile, the silk trails combined with the retro accessories embodied every woman’s deepest fashion dreams.

As for the famed dress, Saab’s team spent three weeks working on the one of a kind handmade embroidery. Using a mix of powder blue and gold beads, the designer’s team was capable of capturing Damietta’s sailboats and the Nile’s chain of mellow waves.

This collection represents Saab’s first ode to the Egyptian culture. Meanwhile, it is one of the many ways he uses to advocate Arab beauty and romance. The designer has already brought his hometown, Beirut, to the heart of Paris a few times before.