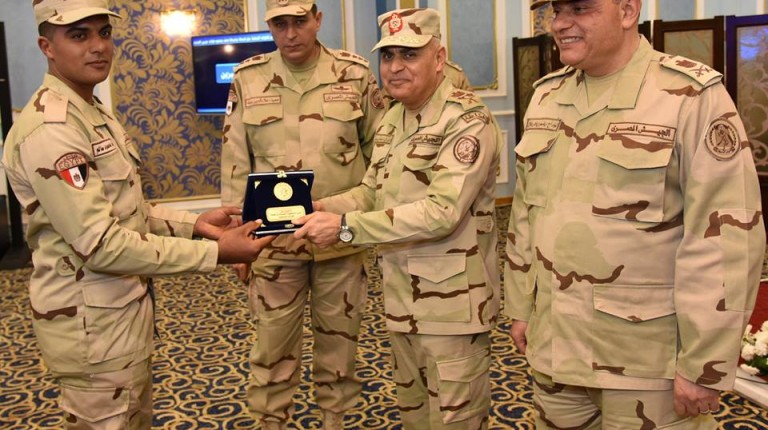 Defence Minister Sedki Sobhi met on Friday with a number of leaders, officers, and conscripts from the border guard forces. During the meeting he praised the efforts they exerted in fighting smugglers and terrorism, the army official spokesperson declared on Facebook.

The defence minister noted during the meeting that the army leadership is interested in bolstering the border guards’ military stationing points with modern weaponry and fighting systems, adding that they are also paying attention to their quality of life and morale.

He also honoured the outstanding border guards, from leaders, officers, and conscripts, in appreciation of their efforts in protecting Egypt’s borders.

Recently, the spokesperson released an official statement on the efforts exerted by the border guard forces in securing Egypt’s borders during the first half of January 2017.

The statement published on Facebook asserted that the efforts included the discovery of smuggling tunnels on the borders in North Sinai and targeting drug dealers.

In the context of the second field army, three tunnels were discovered in North Sinai, 332 smuggled cigarette packages were seized in Rafah, and two unidentified individuals were arrested in possession of drugs.

The third field army seized 1,987 drug parcels in the regions affiliated to the Suez governorate, as well as 250 grams of opium.

Moreover, the statement noted that in the context of the western military region located near the north-western part of the country in Marsa Matrouh, 240 drug parcels were seized. Additionally, security forces also foiled illegal immigrants attempting to cross into Libya through the Egyptian city of Sallum. the army apprehended 226 individuals from various nationalities.